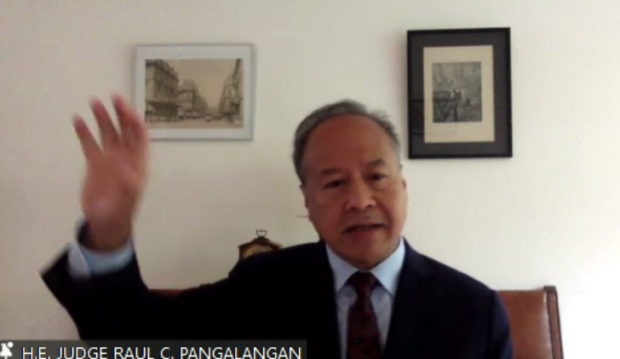 MANILA, Philippines — President Rodrigo Duterte himself “diluted” the validity of the Philippines’ 2016 arbitral court victory by openly expressing his ambivalence about its legality in his State of the Nation Address (SONA), according to retired International Criminal Court (ICC) Judge Raul Pangalangan.

In an online forum earlier in the week, Pangalangan noted that the president delivered his sixth and last annual address to Congress with governments around the world already acknowledging the Philippines’ historic win against China in the international arbitral court in The Hague.

“If we listen to the Sona this Monday, the president’s position on this matter depends on which part of the speech you heard,” he said in a webinar hosted by Stratbase Albert del Rosario Institute on Wednesday.

“Notice that the categorical affirmation of the triumph at The Hague early on in the speech was somehow diluted towards the end,” said Pangalangan, a former dean of the College of Law of the University of the Philippines.

In his SONA, Duterte reiterated that the arbitral ruling, which invalidated China’s sweeping claims to the South China Sea, was already “part of the international law and beyond compromise, and beyond the reach of the passing governments to dilute, to diminish or abandon.”

The president pointed out that he asserted the Philippine position when he spoke before the Association of Southeast Asian Nations and the United Nations General Assembly last year.

But then he digressed from his prepared speech and repeated China’s false claim that it was not bound to abide by the tribunal’s decision because it supposedly did not take part in the arbitral process.

“What will I do with a document that [does] not bind China because they were never a part of that arbitration? There was really no arbitration at all because it was only the Philippine side was heard,” Duterte said.

The president this time, however, did not utter the same words which Chinese officials first used to describe the ruling when it was announced in July 2016 — that the arbitral award was just “a piece of waste paper.”

Duterte also said some “brilliant Filipinos” wanted him to “do something” to enforce the award.

“Do you want war against China? Well, I’ll tell you, even on the coast beach of Palawan, before you can take off, the missile of China would be there in about five or 10 minutes,” he said. “It would be a massacre if I go and fight a war now. We are not yet a competent and able enemy of the other side.”

Retired Supreme Court Senior Associate Justice Antonio Carpio, a critic of the president’s stance in the maritime dispute with China, said it was not true that Beijing did not participate in the arbitral proceedings.

He said at an online press briefing that China submitted a position paper contesting the Philippines’ claim to the West Philippine Sea, waters within its 370-kilometer exclusive economic zone in the South China Sea.

Carpio, an observer during the arbitration hearings, said China was a signatory to the United Nations Convention on the Law of the Sea (Unclos), which states that the “absence of a party or failure of a party to defend its case shall not constitute a bar to the proceedings.”

“When China ratified Unclos in 1996, China gave its consent in advance … to any future arbitration against China that may be brought by another state party under Unclos,” Carpio said.