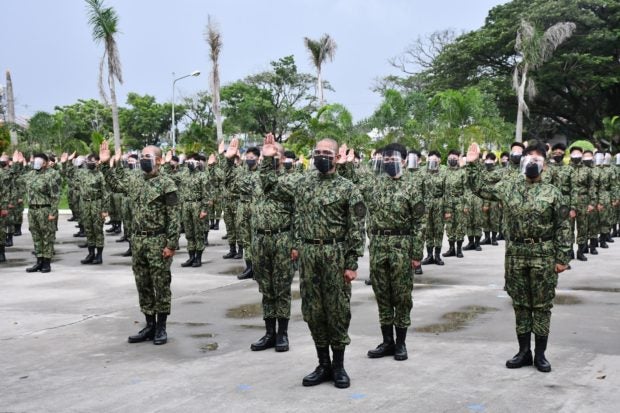 The new police officers in Central Luzon take their oath of honor at the parade ground of Camp Julian Olivas in the City of San Fernando. (Photo from the Police Regional Office 3 public information office)

MABALACAT CITY, Pampanga––Amid the heavy downpour, 283 young men and women took their oath of honor Wednesday at the parade ground of Camp Julian Olivas in the City of San Fernando as new members of the Central Luzon police.

The new recruitment system seeks to eliminate the “corrupt practices” in the selection and hiring of new police officers by doing away with the “padrino (sponsor) system” and alleged bribery to ensure entry into the uniformed service.

Under this recruitment system, the identifies of applicants are concealed, and only their qualifications are evaluated to determine their physical and mental fitness to enter the force.

“We want to end the rotten system, where some applicants get backing from ranking PNP officials just to enter the organization. With this kind of system, there is already corruption. We don’t want these people to enter our ranks,” Eleazar said during the launch May 27 of the Comprehensive Online Recruitment Encrypting System in Camp Crame.

The new PRO3 recruits include 178 men and 105 women from Central Luzon.

He said the rookies would undergo a one-year training at the Philippine National Police Regional Training Center 3 in Magalang, Pampanga, before being given an assignment.