WHO sounds alarm on ‘harmful’ e-cigarettes 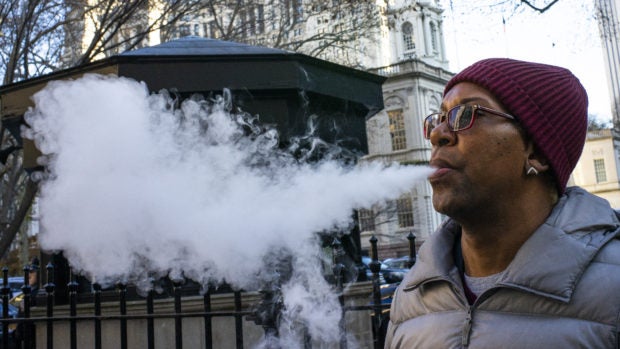 A man vapes as people protest against the New York City Council vote on legislation to ban flavored e-cigarettes outside City Hall on November 26, 2019 in New York City. AFP

GENEVA — Electronic cigarettes and similar devices are dangerous to health and must be regulated to curb the tobacco industry’s “criminal” tactics to get young people hooked on nicotine, the World Health Organization warned Tuesday.

The WHO Report on the Global Tobacco Epidemic 2021, which focused on new and emerging products, was published on Tuesday.

It said ENDS should be tightly regulated for maximum public health protection.

“Where they are not banned, governments should adopt appropriate policies to protect their populations from the harms of ENDS, and to prevent their uptake by children, adolescents and other vulnerable groups,” Tedros said.

“It’s the most criminal act. And it’s a human rights violation,” he told a press conference.

“They run the risk of being addicted for the rest of their lives.”

The report said there were still more than a billion smokers around the world.

Tobacco is responsible for the deaths of eight million people a year, including one million from second-hand smoke, it stressed.

“Their goal is simple: to hook another generation on nicotine. We can’t let that happen.”

The UN health agency is particularly concerned by people under 20 using e-cigarettes due to the harmful effects of nicotine on brain development.

However, regulating such products is not easy as the product range is very diverse and rapidly evolving, said Ruediger Krech, director of the WHO’s health promotion department.

“Distinguishing the nicotine-containing products from the non-nicotine, or even from some tobacco-containing products, can be almost impossible. This is just one way the industry subverts and undermines tobacco control measures,” he said.

The WHO recommends that governments do whatever they can to prevent non-smokers from taking up e-cigarettes, for fear of “renormalizing smoking in society”.

Krech said that while the evidence on e-cigarettes was not yet fully conclusive, there was enough evidence to conclude that they were harmful.

“Let us not be naive in thinking that the tobacco industry would be part of the solution right now: they are still a big part of the problem,” he added.

Prasad said the tobacco industry was “misleading the public and trying to mislead the governments”.

The report found that 32 countries have banned the sale of ENDS.

A further 79 have adopted at least one partial measure to either prohibit the use of such products in public places, prohibit their advertising, promotion and sponsorship or require the display of health warnings on packaging.

“This still leaves 84 countries where they are not regulated or restricted in any way,” the WHO said.

The Geneva-based organization said efforts to regulate e-cigarettes should not distract from the fight against smoking.

Though the proportion of smokers has fallen in many countries, population growth means that the total number of smokers remains “stubbornly high,” the WHO said.