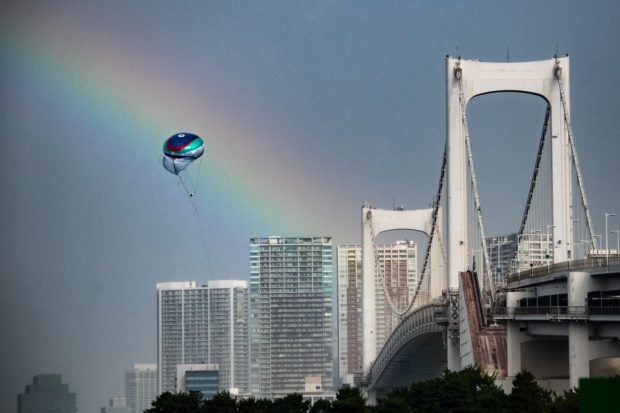 A rainbow is seen during the Tokyo 2020 Olympic Games at the Odaiba Marine Park in Tokyo on July 27, 2021, as Tropical Storm Nepartak approached Japan’s northeast coast. AFP

TOKYO — A tropical storm hit northern Japan on Wednesday but there were no immediate reports of damage and Olympic football matches in the region were due to go ahead.

The storm is passing south of Morioka city in Iwate prefecture, bringing “strong” but not “violent” winds of 90 kilometers (56 miles) per hour, according to the Japan Meteorological Agency.

Miyagi is hosting Olympic football matches on Wednesday — some of the few Tokyo 2020 events that fans are allowed to attend — but organizers said they would not be affected.

Heavy rain prompted some towns in Iwate to issue landslide warnings and a number of local train services were suspended, but not bullet trains.

The storm is projected to weaken as it travels northwest and out into the Sea of Japan by early evening.

On Tuesday, the weather system brought wind and rain to parts of Japan’s east coast, making for challenging conditions at the women’s triathlon in Tokyo.

Organizers rescheduled some rowing and archery events over concerns about high winds and brought forward the final rounds of the surfing competitions to take advantage of the waves.

Japan’s typhoon season runs from around May to October, peaking in August and September.

In 2019, Typhoon Hagibis smashed into Japan as it hosted the Rugby World Cup, killing more than 100 people.