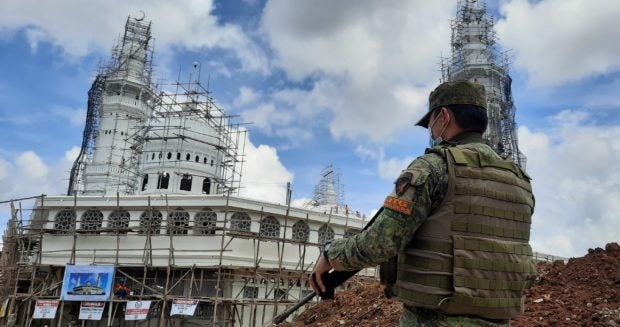 PLACE OF WORSHIP An Army soldier stands guard while workers renovate the Grand Mosque at the city center of Marawi. The most intense fighting between government troops and Islamic- State-linked militants who laid siege to the city in 2017 happened in this area. —RICHEL V. UMEL

KORONADAL CITY, South Cotabato, Philippines — Although some Moro leaders welcomed President Rodrigo Duterte’s marching order for Task Force Bangon Marawi (TFBM) to hasten the rebuilding of the war-torn capital of Lanao del Sur province, Moro groups expressed dismay over the president’s failure to mention the proposed extension of the Bangsamoro transition and the Marawi compensation bill during his State of the Nation Address (SONA) on Monday.

In his sixth and final SONA, Duterte cited the signing of Republic Act No. 11054, or the Bangsamoro Organic Law (BOL), as one of his administration’s key milestones. But he was silent over the clamor by different groups to extend the life of the Bangsamoro Transition Authority (BTA).

Aside from the BTA extension, which Moro leaders consider as critical to the success of the Bangsamoro transition, the Marawi compensation bill has also been long awaited by displaced residents yearning to return to the city four years after the end of the 2017 siege by Islamic State-linked militants.

Lininding said the president’s commitments had not been delivered.

Zia Alonto Adiong, a member of the BTA Parliament, said that while he was glad that the president ordered TFBM to finish Marawi’s rehabilitation process as soon as possible, he would have wanted to hear the president ask Congress to prioritize the compensation bill.

“This is on top of our call,” he said. “I would have wanted to hear him ask Congress to prioritize the allocation of a special fund dedicated to the rehabilitation efforts so that we wouldn’t be facing delays in the future,” Adiong said.

“We’re disappointed that the President did not mention the extension of the (Bangsamoro) transition period as a priority bill. [But] we will not stop appealing to him and lobbying before Congress to pass a law extending the transition period in the Bangsamoro region,” said Samsodin Amella, coconvenor of the Civil Society Organizations Movement for Moral Governance.

In December last year, three lawmakers filed separate bills to postpone the first Bangsamoro Autonomous Region in Muslim Mindanao (BARMM) elections from 2022 to 2025. In effect, this would extend the term of the interim BTA until 2025.

“I was hoping also for a policy statement on the BARMM, if he is in favor of extending the BARMM transition or not. I sincerely hope the President can communicate his position to Congress about this issue, so we may proceed with dispatch on the legislative side,” said Deputy Speaker and Basilan Rep. Mujiv Hataman.

“The absence of it, however, for me, signifies that the President is leaving it up to Congress to decide the fate of the extension of the transition period. As legislators, it is incumbent upon us that we first exhaust all means to understand the need for the extension before we pass judgment,” she said.

If the transition period is not extended, the mandate of the MILF-led BTA will end on June 30 next year, when the first set of elected officials take their oaths of office.

Duterte earlier promised support for the extension of the transition period but a month before the Sona, he left the matter in the hands of Congress.

In March, at least one million signatures were submitted to Malacañang petitioning the President to certify the bills extending the transition period in the Bangsamoro region as priority legislation.