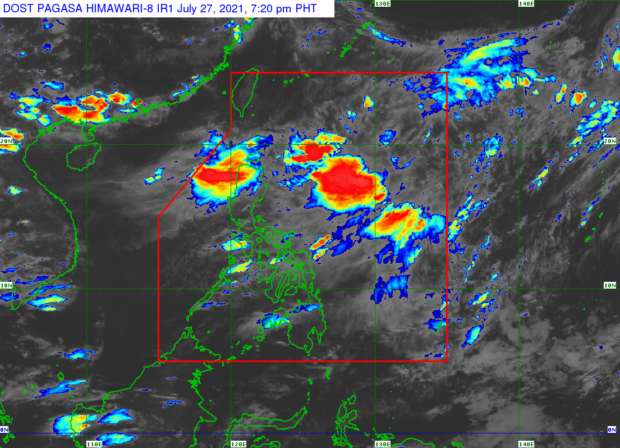 MANILA, Philippines — The southwest monsoon, locally known as habagat, will continue to dump rain over Luzon, including Metro Manila, from Tuesday night through Wednesday, according to the Philippine Atmospheric, Geophysical and Astronomical Services Administration (Pagasa).

Based on its 24-hour forecast issued at 4 p.m. Tuesday, light to moderate to at times heavy rain may be expected in the Ilocos Region, Batanes, Babuyan Islands, Apayao, Zambales, and Bataan.

It also indicated that cloudy weather with occasional rain will prevail over the rest of Luzon, including Metro Manila, and that similar weather conditions may also occur in Aklan and Antique in the Visayas.

Things may be different, however, for the rest of Visayas and Mindanao as Pagasa said these areas may see generally fair weather within the next 24 hours despite the possibility of thunderstorm formation around late afternoon and evening.

(The rest of the Visayas and Mindanao will be sunny and warm, but expect thunderstorms in the late afternoon and evening.)

Below are the state weather service’s forecast temperature range in key cities/areas:

Pagasa’s Figuracion said no storms may be expected to build or enter the Philippine Area of Responsibility in the next two to three days.

However, gale warning remains raised over the northern and western seaboards of Luzon, including Manila Bay, as Pagasa sees rough sea conditions with waves likely reaching up to 4.5 meters in these areas.