MANILA, Philippines — President Rodrigo Duterte, in a rare media interview via video call, dispelled rumors he was rushed to the hospital, saying he was “okay” and actually dropped by a restaurant for dinner after delivering his final State of the Nation Address (Sona). 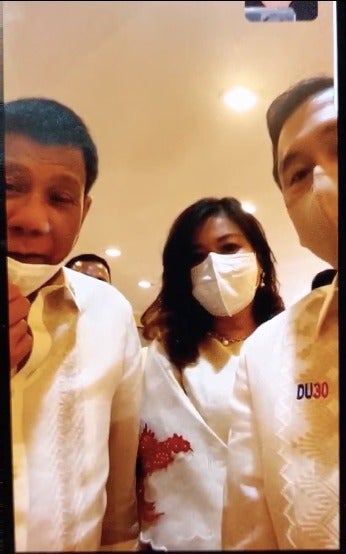 President Duterte, in a media interview via video call, denies he was brought to a hospital after delivering his final Sona. Image courtesy of dzBB

“Wala po, sa awa ng Diyos (Thank God, I’m not),” Duterte told dzBB, a copy of which was shared to reporters on Tuesday, when asked about his supposed hospitalization at The Medical City in Pasig right after the Sona.

(I was brought by a helicopter. But it was raining that’s why I had to travel by land. I passed by the Emperor restaurant to eat.)

Duterte was accompanied by his partner Honeylet Avanceña and former long-time aide, now Senator Christopher Go during the video call.

The issue on Duterte’s health has been recurring even at the start of his presidency, after he admitted that he has Buerger’s disease and Barrett’s esophagus, among others.

Malacañang had previously denied rumors that the President was supposedly confined at Cardinal Santos Hospital.