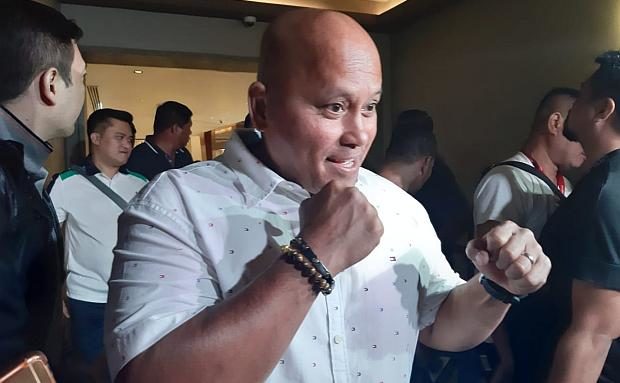 MANILA, Philippines — Sen. Ronald “Bato” dela Rosa agreed on Monday with the call of President Rodrigo Duterte to look into the allegation that a police colonel was behind the illegal importation of AK-47, or Kalashnikov Model 47, rifles.

Duterte made the call for a congressional probe of the issue in his final State of the Nation Address.

He did name the police official, but he noted the rifles had been used in the killing of several uniformed personnel — implying that the weapons had fallen into the hands of the government’s enemies.

“I’d like to ask Congress, especially Senator Bato, kindly dig on because we have identified the person who imported the AK-47 into this country on the pretext of using it in the security — providing security and guards in all, in business establishments and for those who can afford their home,” Duterte said.

“This policeman, I think, is still there. He was a colonel and he is still… Nothing happened. And many soldiers have died because of the arms brought to the Philippines,” he added, speaking partly in Filipino.

Duterte dared Dela Rosa, known for spearheading the implementation of his drug war, to shoot the AK-47 importer if the senator should happen to see him.

Duterte added that it should not matter as Dela Rosa, like him, was also facing charges at the International Criminal Court (ICC) for his role in the drug war.

“So that my orders to the – to you, if you see them walking around, kindly shoot them dead. I would be happy,” Duterte said.

“Anyway, you are already charged in the ICC together with me. So what is the problem of adding another one?” he went on. “Another idiot Filipino who has caused great damage to our country. That’s the truth about it.”

After the SONA, Dela Rosa told reporters that he would check it with the Philippine National Police (PNP), although he said he believed that charges had already been filed at the Sandiganbayan, the country’s anti-graft court.

“I will research with the PNP. I think approp[priate] charges were already filed in Sandigabayan against those police officers involved and the trial is still ongoing,” he said.

Neither Duterte nor Dela Rosa named the official. But a certain Chief Supt. Raul Petrasanta — a brigadier general in current rank designations — was charged with graft in 2015 for his role in missing AK-47s that were said to have ended in the hands of communist rebels in Mindanao.

Over 1,000 of the Russian-made AK-47 assault rifles — worth over P52 million — were allegedly sold to the New People’s Army (NPA) from 2011 to 2013, with high-ranking PNP officials supposedly assisting the sale unwittingly.

The AK-47, which stands for Avtomat Kalashnikov Model 47 — “avtomat” being Russian for “automatic.” It was named after its designer, Mikhail Kalashnikov.

The firearm is one of the world’s most famous and commonly-used assault rifles owing to its simple yet seemingly indestructible construction. It has been a weapon of choice for some groups doing jungle warfare as it is less sensitive to natural factors like humidity and mud compared to its more contemporary counterparts.

READ: In the know: AK-47 assault and sniper rifles