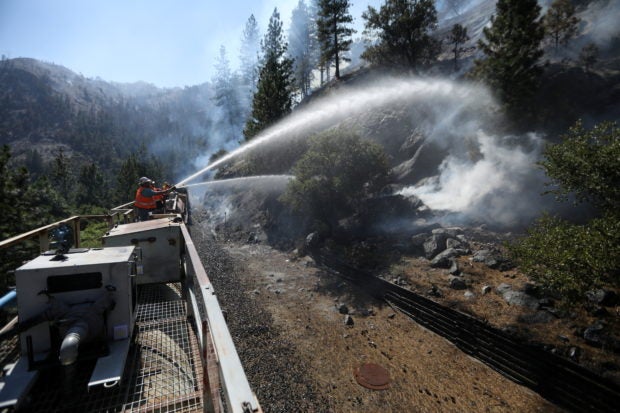 Crews and officials battling a large fire that has incinerated more than 190,000 acres in northern California braced for the possibility on Sunday that smoke columns could spawn lightning storms capable of igniting more blazes.

The swarming Dixie fire in Butte County, north of Sacramento, gained ground on Saturday and was only 21% contained as of Sunday morning, according to the California Department of Forestry and Fire Protection.

“There is a high probability for the smoke columns to develop what we call a pyrophoric (cloud),” fire behavior analyst Dennis Burn said in a video message posted on the Facebook page of Lassen National Forest.

Large fires like the Dixie fire and Oregon’s Bootleg fire, a massive blaze that has blackened more than 400,000 acres and was 42% contained as of Sunday, can at times generate their own weather, like lightning storms.

On Saturday night, the Dixie fire joined with another one nearby, and firefighters have struggled to contain the blazes that have triggered evacuations in several communities.

Authorities said they expected the Dixie fire to become very active again on Sunday, while crews battling the Bootleg fire to the north in Oregon faced the “warmest and driest” day for the next several days, fire officials said in an update  on Sunday.

The Bootleg fire is one of more than 86 large active wildfires in 12 states that have charred more than 1.4 million acres (more than 566,000 hectares) in recent weeks, according to the National Interagency Fire Center (NIFC) in Boise, Idaho.

The conflagrations in the U.S. West, marking a heavier-than-normal start of the wildfire season, have coincided with record-shattering heat that has baked much of the region in recent weeks and caused hundreds of deaths.

Scientists have said the growing frequency and intensity of wildfires are largely attributable to prolonged drought and increasing bouts of excessive heat that are symptomatic of climate change.