Duterte for VP? OVP hopes he won’t experience what Robredo went through 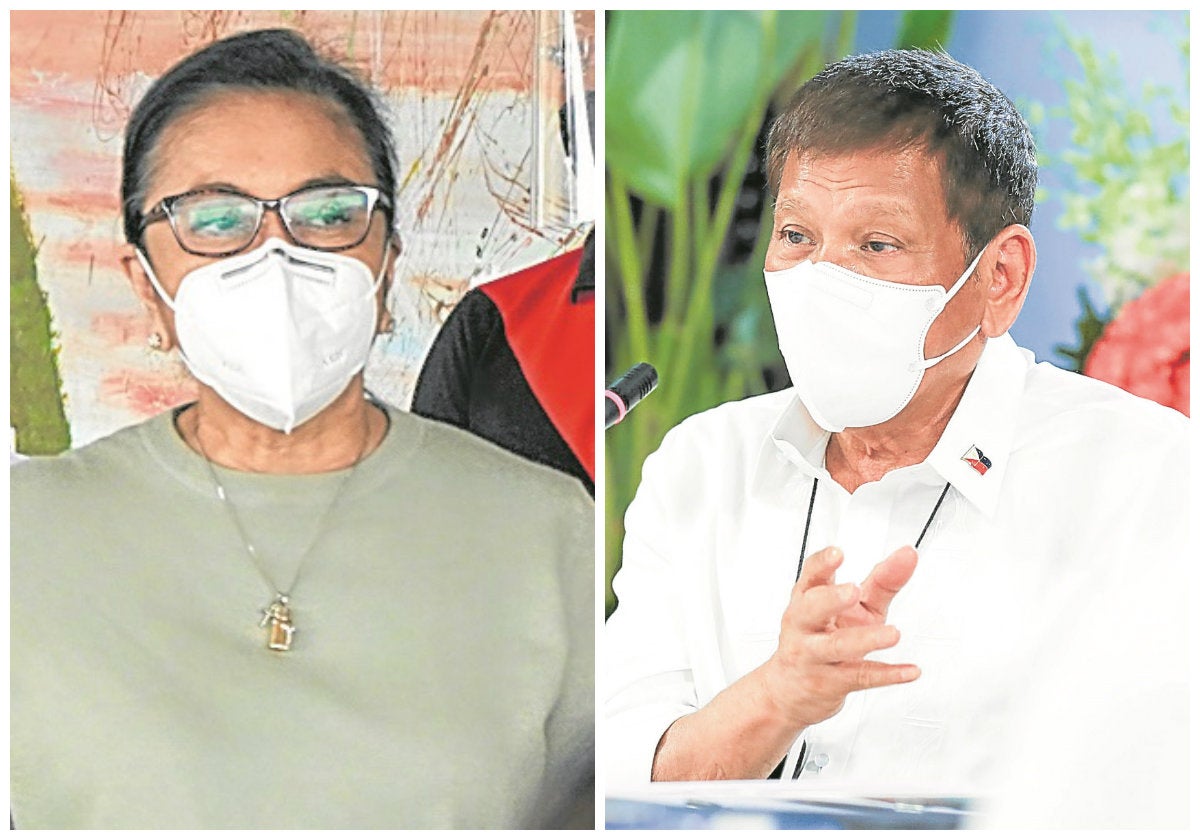 MANILA, Philippines — Sitting presidents running for new elective positions after their terms have ended are rare, but not unprecedented: During the 2010 elections, former president Gloria Macapagal-Arroyo stepped down from Malacañang and stepped into Congress, representing her hometown of Lubao, Pampanga.

Weeks ahead of his last State of the Nation Address, President Rodrigo Duterte already dropped hints on making a similar feat, but neither for Congress nor for Davao City: In a recent meeting with his party-mates at PDP-Laban, he said he remains open to the possibility of running for vice president.

While there is a raging discussion as to whether it should be allowed under the 1987 Constitution — as he places himself on the direct line of succession for president — the current Office of the Vice President (OVP) only has one wish for Duterte if he succeeds: It hopes his possible stint would not be as stressful as what Vice President Leni Robredo went through.

“Well ako, ito lang ang sasabihin ko,” Robredo’s spokesperson Barry Gutierrez said during an exclusive interview with INQUIRER.net.  “I hope if he does run for vice president and if he does win as vice president, and ‘yong mananalong presidente eh hindi niya kakampi, he doesn’t have to experience what VP Leni experienced.”

“‘Yon lang ‘yon.  I would not wish ‘yong na-experience ni VP Leni to happen to any other vice president, and to my recollection, this has never happened since 1987.  More often than not, the president and the vice president have not come from the same ticket,” he added.

Since 1987, there were only two instances when the sitting president and vice president were allies: Under former presidents Arroyo and the late Corazon Aquino.  But the rest of the presidents — from Fidel Ramos, Joseph Estrada, and Benigno “Noynoy” Aquino III — had vice presidents from a different ticket.

Gutierrez argued that vice presidents before Robredo were accorded with respect, and allowed to handle one department despite being on opposite circles.  In contrast, Robredo got two posts under the Duterte administration, but at the expense of being short-lived and being subjected to restrictions.

Weeks after both Duterte and Robredo assumed office in June 2016, the latter was assigned by the President to head the Housing and Urban Development Coordinating Council (HUDCC).

However, just after almost five months, Robredo eventually tendered her resignation as she found it impossible to perform her job when the President barred her from attending cabinet meetings.

“Let’s start with ‘yong ano, ‘di ba she was appointed HUDCC chairperson, 2016.  And then biglang she received a text message from then cabinet secretary Evasco — na di ba na-publicize naman ‘yon — na as per instruction of Bong Go, the Mayor Duterte is asking you not to attend cabinet meetings until further advise,” Gutierrez told INQUIRER.net.

“How can you be the head of, well, basically a cabinet-level position ang HUDCC, you’re in-charge of isang buong branch of government dealing with housing and urban development, tapos di ka mag-aattend ng mga cabinet meeting di ba.  That put the Vice President in an untenable situation,” he added.

During that span, Robredo was linked to several ouster plots, even getting a sedition charge in 2019.  Robredo said back then that she thinks Duterte personally knows that she is not part of any destabilization plan.

But the Vice President’s stint with the administration was given a second chance after Duterte dared her to take charge of the anti-drug program, venting his frustration over Robredo’s criticisms of the government’s bloody war on drugs.

Robredo eventually got the offer to co-chair the Inter-Agency Committee on Anti-Illegal Drugs (ICAD) but only managed to hold the post for 18 days — as she was fired again on grounds that she talked to agencies already rebuked by the Philippine government.

The Vice President contradicted such claims, saying that she only talked with the United Nations and the United States Embassy — both agencies already partly involved in the drug war.

Gutierrez implied that the amount of disrespect that Robredo gets is evident in how she was treated unprofessionally in both positions, and also in how baseless attacks are hurled at the Vice President — not by trolls on social media — but by actual Cabinet officials themselves.

“How can we respond seriously to a text message coming from Secretary (Salvador) Panelo who is not even authorized to appoint anyone di ba? […] So hinintay namin, so finally we got, a few days after ‘yong initial announcement nakatanggap ng memorandum from the Office of the Executive Secretary signed by ES (Salvador) Medialdea, eh di the Vice President responded,” he said.

“Tinanggap niya, and you know what happened afterward, pero ang punto ko lang, she has never turned her back on any opportunity when she was asked to serve, ‘di ba.  She has tried to do kung anuman ang i-assign sa kanya, to the best of her ability, as conscientiously as she can, pero sa dulo mukhang ‘yong kabila ‘yong ayaw makipagtrabaho sa kanya eh,” he added.

To the government’s credit, Gutierrez said the OVP was not given a hard time in dealing with other government agencies that they may need cooperation with for their projects — like the educational programs and COVID-19 response which required help from the Department of Education and the Armed Forces of the Philippines.

But the administration’s treatment of Robredo is a different story, he says.

“Idi-distinguish ko ‘yon sa kung papaano tini-treat si VP […] the way that she has been repeatedly used as a punching bag by people in the administration, ito si Panelo the other day, ilang beses ko na siya narinig, he goes on his — may radio program ba siya or something — babanatan niya ‘yong duly-elected Vice President,” Gutierrez said.

The strained relationships between Duterte and Robredo led some people to think that presidents and vice presidents should be elected as a single ticket during the elections — and not separately as current laws dictate.

One glaring example used was that Arroyo, who won in 2004 with his running mate and then-vice president Noli de Castro, had entrusted the latter to take care of the government while she was away on foreign trips.

Now, Duterte taps Cabinet officials to do the job, even when the second-highest official of the land is also in the country.

But Robredo’s lawyer and election law expert Romulo Macalintal believes such changes are not necessary anymore — especially since the 1987 Constitution explicitly deleted old provisions which patterned local polls to the United States.

“While that is the way the US elects their president and VP I don’t think it is ideal under our political setting. If we adopt that system it will deprive us of our right to choose our leaders,” Macalintal told INQUIRER.net in a text message.

“As a matter of fact under section 211 (28) of the 1985 omnibus election code, it is provided that ‘a vote for the President shall also be a vote for the VP running under the same ticket of a political party’ pursuant to Section 3 Art VI of the 1973 Constitution which contains such provision. But that was deleted in the 1987 Constitution by providing under Sec 4 Art VII that the President and the VP ‘shall be elected by direct vote of the people’,” he added.

Further, Macalintal also thinks that reverting to the old system does not provide benefits since it is not a complete guarantee that presidents and vice presidents from the same ticket would always have a harmonious relationship, especially come election time.

“Being elected in the same party is not an assurance that the President and the VP will have a smooth relationship especially if the elected president would not pick his VP as a presidential candidate and would think of selecting his own choice or bet for the next presidential election,” he stressed.

“Different political dynamics after the election could still affect the relationship of the president and VP (although) elected with the same political party,” he added.

Gutierrez, who is also a lawyer by profession, thinks that the choices of the Filipino people should be respected, as electing leaders from separate parties is not something new.

“I think there is something in the way the Filipino voter thinks na wants a certain balance.  Ang punto, ‘sige, boto ko ‘yong presidenteng ito, gusto ko ‘yong vice president hindi niya eksaktong kakamping-kakampi para may balanse’.  I think that’s something na to a certain extent, we should respect,” he said.

“The voter is free to choose kung sino ang gusto niyang presidente, and the fact — for me — in so many times in the past and up to the present actually under the current administration, iba ang pinipili ng karamihan ng botante na presidente at vice president tells you something about ‘yong preference no’ng Filipino voter,” he added.

Gutierrez believes it may be ideal and practical to have leaders on the same page, but a functioning democracy that allows leaders to check on each other — just like Duterte and Robredo did for all five years — may be more important.

“And I think we should continue to respect that.  I mean I understand where the proponents of the ‘baguhin natin ‘yong sistema’ are coming from, it’s a practical consideration, but I think at the end of the day, we should let that choice lie with the voter,” he noted.