Palace: Robredo’s choice to lead opposition made her a ‘decor’ in Duterte admin 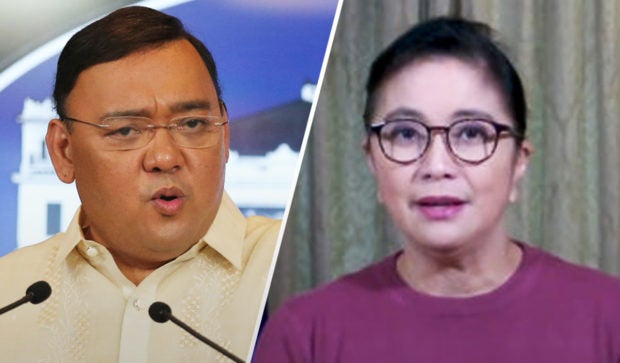 MANILA, Philippines — It was Vice President Leni Robredo’s choice to lead the opposition that made her a “decoration” during her term, Malacañang said Wednesday, insisting that President Rodrigo Duterte did not lack in giving her a role in the government.

This was presidential spokesperson Harry Roque’s response to Robredo’s remark that she would not treat Duterte the way he treated her if they were to switch positions after the 2022 national elections.

In 2016, Robredo was appointed as head of the government’s Housing and Urban Development Coordinating Council, but resigned after she was asked to stop attending Cabinet meetings. She was also appointed as co-chair of the Inter-Agency Committee on Anti-Illegal Drugs in 2019, but her stint was cut short when Duterte fired her.

Roque said he believes the President will have a different “destiny” from Robredo should he become the country’s second highest official come 2022.

(We are the ones who trace our destiny. Maybe that’s the kind of destiny carved by VP Robredo. But in my opinion, President Duterte will have a different destiny if he becomes the vice president.)

Robredo has said she is open to be a candidate for the presidency though she has yet to decide whether to seek the gubernatorial post in Camarines Sur.

Meanwhile, the President has floated a number of times running for vice president, the most recent of which was when he said he would gun for the second highest post to get immunity from lawsuits he may face.