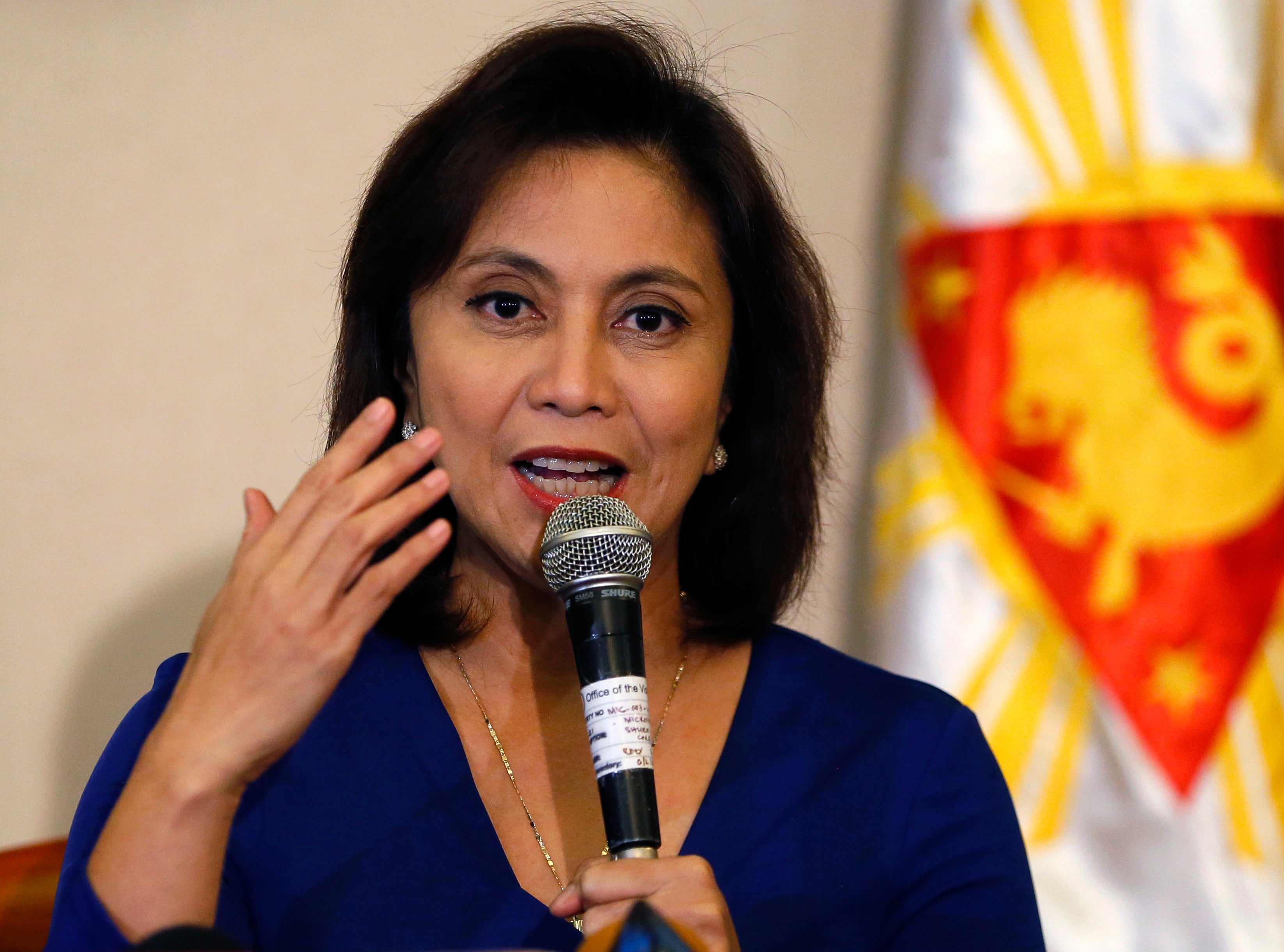 “In effect that was what she was saying, ‘Fire me if you don’t want me.’ In effect, that’s what she was saying… You don’t say that to your boss who is the President of the Philippines,” he said at a hastily called press briefing to explain why Duterte fired Robredo as cochair of the Inter-Agency Committee on Anti-Illegal Drugs.

Panelo said Duterte told him about his decision at past 8 p.m. (Manila time) on Sunday after clarifying with him his previous apology for believing false reports that Robredo had invited a critic of the drug war who had recommended the President’s arrest.

“He said ‘I’m not only apologizing, I’m firing her. And I said, ‘when?’ [He replied] ‘now,’ and I asked him if I could announce it. ‘That would be my departure statement,’” he said.

Duterte was scheduled to arrive here on Sunday to attend the 2019 Asean-Republic of Korea Commemorative Summit.

Panelo said the President cited other “missteps” by Robredo in deciding to sack her, including her supposed failure to present a program of action in her new role as co-chair of the interagency ommittee on narcotics in the three weeks she was in office.

“The Vice President has [committed] many missteps. Instead of performing her task, the scope of which is outlined in an executive order creating [the committee], she instead opted to talk to foreign nationals, like the US and the United Nations and others who have prejudged the government’s campaign against illegal drugs,” he said.

“All she had to do was present a new program of government with respect to the program on illegal drugs, which means a program that’s better than the one she has criticized as a failure or ineffective, but she failed to do that,” Panelo said.

“But more than two weeks has passed she has yet to present a program,” he said.

But when asked whether the President had read at least two reports with recommendations submitted by Robredo in recent weeks, Panelo admitted that Duterte had not found time to do so.

He dismissed suggestions by critics that the timing of Robredo’s firing suspiciously coincided with the flak received by the organizers of the 2019 Southeast Asian Games.

“There is unanimity of opinion that the criticism is without basis. We already issued a statement on that and the SEA Games organizer had apologized already,” Panelo said.

In a statement issued earlier on Sunday night, Panelo said: “Essentially, what the Vice President has done is to embarrass our country, apart from detrimentally undermining the government’s efforts to preserve the general welfare.”

He said Robredo had wasted the chance for her to improve the war on drugs, which the administration and the political opposition could have fought together.

“Unfortunately, she wasted such opportunity and used the same as a platform to attack the methods undertaken by this administration. Such tack was even motivated by hubris to prove their past arguments against the anti-illegal drug operations were correct,” Panelo said.

“It at once crumbled as her request for police data validated the falsity of their arguments that the extrajudicial killings are state-sponsored,” he said.

There was no immediate comment from the Office of the Vice President.

Sen. Panfilo Lacson, an adviser to Robredo on the war on drugs, said Duterte’s action was expected.

“Ho-hum. [It’s] not shocking, not surprising, not unexpected,” Lacson said in a text message.

Senators Francis Pangilinan and Risa Hontiveros said Duterte’s strategy to discredit the Vice President blew up in his face.

Duterte appointed Robredo to the counternarcotics committee on Oct. 28, after she had angered him with her criticism of the brutal campaign in an interview with the news agency Reuters.

Against the advice of her allies in the political opposition, Robredo accepted Duterte’s offer six days later and started to work by meeting with members of the committee, requesting access to the list of the government’s high-value targets in the illegal drug trade.

Law-enforcement members of the committee objected, saying the information was classified.

Panelo said in his statement on Sunday that Robredo’s request could not “be given the benefit of the doubt as being free from malice or manipulation.”

Duterte on Tuesday night told a news conference that he had changed his mind about making Robredo a Cabinet member because she was “talkative” and that she might leak sensitive information.

Earlier, Malacañang, after describing her meetings with US and UN officials and several organizations as “educational,” cited “missteps” by Robredo, including meeting with foreigners and “enemies of the state” who had prejudged the war on drugs.

Duterte also said he could not trust Robredo because she was the leader of the political opposition and that he did not really know her.

On Wednesday, Robredo said that if Duterte wanted her out of the interagency committee, all he needed to do was tell her.

In Davao on Saturday, Duterte told reporters that he could “never” trust Robredo because she belonged to the opposition Liberal Party.

“There can never be trust that can be nurtured between the two of us, for the simple reason that Leni Robredo is with the opposition and I’m on the other side,” he said.

He also claimed he had not seen Robredo perform her duties as co-chair of the interagency committee on narcotics nearly a month after he had appointed her to the post.

“Insofar as what she is doing now, that is not very clear to me … We all have our own assessment. For me, she has not really worked,” Duterte said. —WITH REPORTS FROM JULIE M. AURELIO, MARLON RAMOS, AND GERMELINA LACORTE