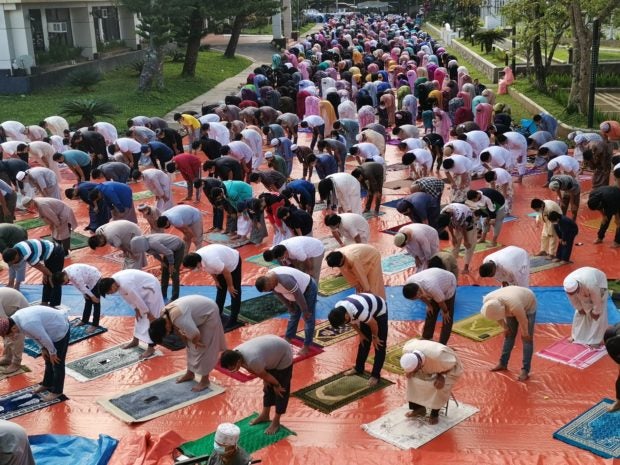 Muslims in Marawi City gather to pray at the Lanao del Sur provincial capitol complex on Tuesday (July 20, 2021) morning in observance of Eid al-Adha or the Feast of Sacrifice. (Divina M. Suson)

MARAWI CITY — Faith proved an irresistible force for many Muslims in this lone Islamic City in the country as they observe Eid al-Adha or the Feast of Sacrifice on Tuesday.

As the call to prayer was sounded early in the morning, hundreds of Maranaos, young and old, braved health restrictions and flocked outside a masjid within the provincial government complex here.

The ground around the masjid was covered with tarpaulin for the occasion.

Most of the faithful wore prayer robes and brought prayer mats of various colors and designs. Some elderly had chairs to sit on, and a few were in wheelchairs.

Elderly woman Sandosin Teraop, who was with her extended family, said the health risks of coming to the gathering were outweighed by the strong urge to profess their faith.

“This celebration is important to the Muslims because this is the time when we are going to ask for forgiveness for the sins we committed,” Teraop explained.

Eid al-Adha celebrates the faith of Prophet Ibrahim as shown in his willingness to sacrifice his son Ismael in obedience to God.

Tuesday’s observance was more festive compared to the subdued observance of Eid al-Fitr last May when religious authorities put off the congregation of the faithful as the province experienced a renewed surge of new coronavirus disease (COVID-19) infections.

Mass gatherings are allowed Tuesday but only up to 50 percent of a venue’s capacity, said Col. Rex Derilo, Lanao del Sur police director.

In his message to the country’s Muslims, President Rodrigo Duterte said Eid al-Adha is “a fervent reminder to the people that, even amid life’s difficulties and challenges, our sacrifices have profound value and meaning.”

“It is my sincere hope that our Muslim brothers and sisters will find renewed faith and spirituality, especially when called to emulate Ibrahim’s devotion to his belief,” the president said.

“I stand in solidarity with you in pursuing our shared goal of building a society that transcends religious, political, and cultural barriers,” he added.

In his prayer, Aleem Alibasher Abdulatif asked for forgiveness and strength among the local Muslims as they continue to bear the burden of displacement due to the 2017 Marawi siege and the dire impact of the pandemic.

“These (issues) are big sacrifices for us,” Abdulatif later told the Inquirer. “We pray for patience so they endure the situation,” he added. 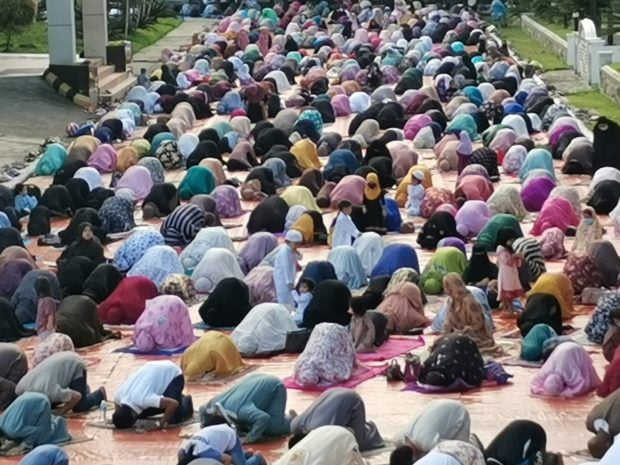 Muslims in Marawi City gather to pray at the Lanao del Sur provincial capitol complex on Tuesday (July 20, 2021) morning in observance of Eid al-Adha or the Feast of Sacrifice. (Divina M. Suson)

Close to 90,000 residents of Marawi City are still unable to return home four years after the siege, many of them living in cramped transitory shelters. The health restrictions have worsened their economic situation.

Abdulatif said they also prayed “that Allah guides our health experts as they alone are incapable” of finding effective solutions to the challenges of COVID-19.

“We owe them the success and continuous efforts to build a new region that can stand against any challenge and pave the way for a brighter future,” Ebrahim said.

The Bangsamoro Autonomous Region in Muslim Mindanao (BARMM) is a product of four decades of struggle for self-determination of the Moro people.

Activists took advantage of Tuesday’s Eid al-Adha gatherings to call attention to pending proposals in Congress to extend by another three years the Bangsamoro transition by postponing regional parliamentary elections next year.

Outside the Sultan Haji Hassanal Bolkiah Mosque in Cotabato City, the largest mosque in the country, hundreds of supporters signed a white tarpaulin praying for the extension of the Bangsamoro Transition Authority (BTA) until 2025. The 80-member BTA currently governs the BARMM.

“Dear President Rodrigo Roa Duterte: We are humbly appealing to you to announce during your SONA (State of the Nation Address) that (the) extension of the Bangsamoro transition period is a priority bill (of your government),” the tarpaulin read.

Duterte will deliver his sixth and last SONA on July 26.