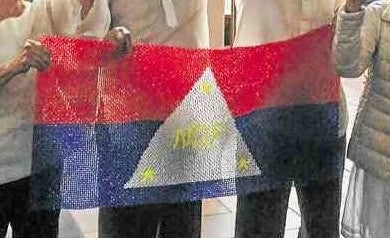 MANILA, Philippines — The Anti-Money Laundering Council (AMLC) has issued a freeze order against the properties, funds, and other accounts of the National Democratic Front (NDF).

This developed after the government’s anti-terrorism body designated the NDF as a “terrorist group.”

Through Resolution No. TF-2, the AMLC directed the issuance of the freeze order that will  “take effect immediately against the National Democratic Front (NDF), also known as the National Democratic Front of the Philippines (NDFP), pursuant to its designation as terrorist by the Anti-Terrorism Council (ATC) Resolution No. 21 (2021) dated 23 June 2021, and the freezing without delay” of the organization’s property or funds, and other related accounts.

The AMLC resolution enumerated the freezing of the following NDF assets:

Also, the AMLC said it will prosecute under Terrorism Financing Prevention and Suppression Act of 2012 any person, whether natural or juridical, including covered persons, private companies, government owned or controlled corporations, and government agencies and instrumentalities who:

“All persons, organizations, associations or groups of persons whose property or funds are frozen, including related accounts are hereby informed that they may avail of the remedies under Republic Act No. 11479, otherwise known as Anti-Terrorism Act of 2020, and its Implementing Rules and Regulations and under the TFPSA and its Implementing Rules and Regulations,” the resolution reads.

In a five-page resolution made public Monday, the ATC said it “found probable cause” to name NDF as a “terrorist group of persons, organization, or association for having committed, or attempting to commit, or conspire in the commission of the acts defined and penalized under Sections, 7, 10, and 12 of the ATA.”

Sections 7, 10, and 12 of the Anti-Terrorism Act (ATA) refer to the conspiracy to commit terrorism, recruitment to and membership in a terrorist organization, and providing material support to terrorists.

According to ATC, NDF is an essential part of the Communist Party of the Philippines-New People’s Army (CPP-NPA).

NDF is said to be the political arm while NPA is the armed wing of the CPP.