After unprecedented protests, what next for Cuba? | Inquirer News
Close
menu
search

After unprecedented protests, what next for Cuba? 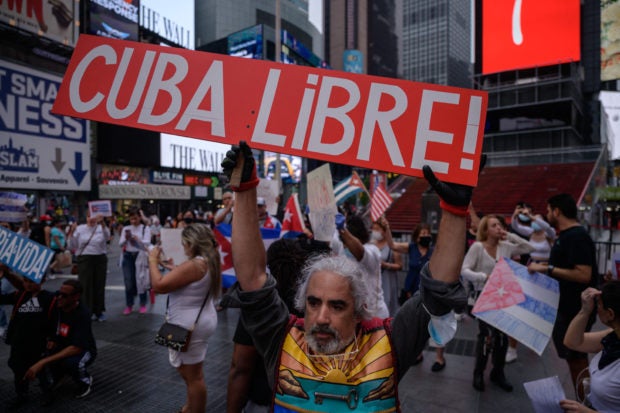 Demonstrators hold placards during a rally held in solidarity with anti-government protests in Cuba, in Times Square, New York on July 13, 2021. AFP

HAVANA — A week after unprecedented anti-government protests in communist Cuba, a superficial calm appears to have returned to the island.

But experts told AFP discontent will continue simmering unless people see a clear improvement to their economic conditions and political rights.

Analysts look at possible scenarios for the future.

With cries of “we are hungry,” “down with the dictatorship,” and “freedom,” the July 11 protests erupted spontaneously in the town of San Antonio de los Banos before spreading like wildfire to some 40 other locations, including the capital Havana.

The protests lasted little over a day, resulting in one death, dozens of injured and more than 100 arrests.

Cuban political scientist Rafael Hernandez foresees that the communist authorities, used to controlling all aspects of life in Cuba, will now seek to identify and keep a close eye on political opponents.

“I would expect that they will keep them under strict surveillance and should they make a new call to action, arrest them,” he said.

Rafael Rojas, a Cuban historian living in Mexico, said there would be a “process of neutralization” of those behind the protests.

“An operation has been launched to identify possible leaders.”

This may not be enough to avoid “a new social explosion, but perhaps not of the dimensions we saw,” said Rojas, adding any future outbursts are likely to be “more localized.”

The protests were largely driven by a population fed up with food and medicine shortages amid a spike in Cuba’s coronavirus epidemic and the effects of its worst economic crisis in 30 years.

Three days after the demonstrations, President Miguel Diaz-Canel announced measures seeking to calm the mood, granting permission for people to bring food and medicine into the country without paying import duties.

Hernandez said the government would likely take further emergency measures to soften the blow of the economic crisis.

But it is the economy itself that needs boosting, particularly by loosening the grip on private enterprise so as to bolster growth and employment.

Earlier this year, the government expanded the number of activities in which private entrepreneurs are allowed to operate, and gave the provisional green light for small and medium enterprises, though limited to some sectors.

The government is historically the biggest employer in Cuba.

Havana was employing “a tactic of slowly loosening up to release pressure,” said Mauricio de Miranda Parrondo, an economist at the Pontifical Javeriana University in Cali, Colombia.

But “this is a failed tactic because it does not strategically solve the country’s problems,” he added.

The Cuban government has similarly made nods to greater political freedoms.

Yet, after a few hundred artists and intellectuals held a rare free speech protest outside the culture ministry in Havana, many saw themselves relegated to their homes by police, and their communications cut. 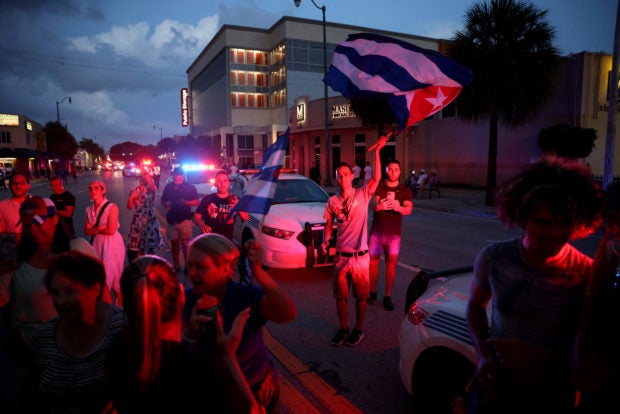 People rally near Versailles, a Cuban restaurant in the Little Havana neighborhood, in support of the protests in Cuba on July 11, 2021 in Miami, Florida. AFP

A new Cuban constitution approved in 2019 recognizes the rights to free expression, public protest and membership of civil associations, but without obvious ways for people to assert them.

Undertaking reforms “of civil rights seems to me will be welcomed as much outside of Cuba as in it,” said Rojas.

One of the key contributors to Cuba’s dramatic economic collapse is the toughening of US sanctions during the administration of Donald Trump after years of appeasement and relaxation of the blockade under his predecessor Barack Obama.

Cuba has been under US sanctions since 1962 and had been hoping for a relaxation under Joe Biden, which has not come.

While Biden had promised on the campaign trail to bring back some of Obama’s policies and to seek a normalization of ties, his administration has yet to reverse Trump’s last-minute redesignation of Cuba as a state sponsor of terrorism.

And a quest for a better relationship may have been hampered by Havana’s response to the biggest protests since the Cuban revolution of the 1950s that brought Fidel Castro to power — with the authorities arresting dozens. Many are still being held.

Last week, Biden said of the events: “Cuba is unfortunately a failed state, and (is) repressing their citizens.

“There are a number of things that we would consider doing to help the people of Cuba, but it would require a different circumstance or a guarantee that they would not be taken advantage of by the government.”

The last major protests in Cuba were in 1994. Those were also against economic hardship but were limited to the capital and quickly put down by police.

At the time, some 34,000 Cubans left the island for the United States within a month — with permission from Havana.

The migrants were welcomed in Florida in 1994, but this time, the United States has said it would not accept a repeat.

De Miranda, the economist, said the coronavirus pandemic makes mass migration unlikely anyway, and the Cuban government was unlikely to allow a mass exit of its citizens this time round for fear of further irking Washington.