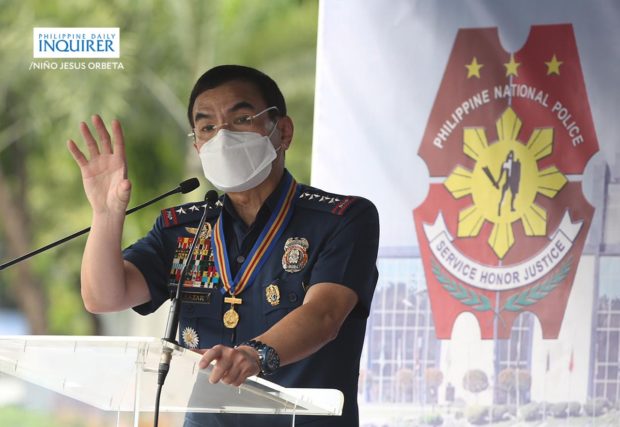 MANILA, Philippines — Philippine National Police (PNP) chief Gen. Guillermo Eleazar on Tuesday said the allegation that the government’s war on drugs resulted in an increase of abusive policemen is “baseless and unfair” as the organization has never tolerated any form of abuse.

Eleazar’s reaction was in response to an Ateneo School of Government study of former Education Secretary Edilberto de Jesus claiming that “privileges given to cops gave rise to corruption and abuse of power.”

“I would like to point out that the PNP and other enforcers of the war on drugs were never bestowed any privilege as the study claimed,” Eleazar said in a statement.

“I think the claim that the war on drugs resulted in an increase in the number of abusive cops is baseless and an unfair assumption because the PNP has never tolerated rogues in its ranks,” he added.

The police chief also pointed out that the PNP has its own “mechanism” to make rogue policemen accountable.

“In enforcing the war on drugs, the PNP takes into high consideration accountability and adherence to human rights-based policing,” he pointed out.

He continued: “Police personnel who commit any violation in the Police Operational Procedure or abuse in conducting operations are held accountable for their actions or lapses.”

Recently, Eleazar has allowed the Department of Justice to check the records of only 61 records out of 5,655 police operations that resulted in deaths of suspects during the government’s campaign against illegal drugs.

“In President Rodrigo Roa Duterte’s war on drugs, law enforcement is just part of the equation in coming up with a solution to put a stop to the narcotics trade,” Eleazar said.

Eleazar also disputed the claim that the drug war is ineffective, saying the data would “refute” this allegation.

PNP also said that 22,093 barangays have been declared drug-free.