Duterte widens split in PDP-Laban by swearing in new officers 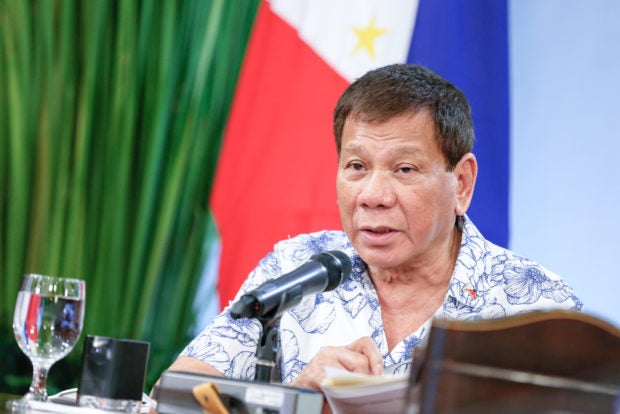 Duterte recognized Energy Secretary Alfonso Cusi, the party vice chair who was earlier expelled by Pacquiao, as the PDP-Laban’s new president, replacing the senator, who leads the other faction in the party. (See related story on Page A6)

Duterte, who has been taking potshots at Pacquiao over the senator’s allegations that corruption worsened under his administration, threw most of his jabs at Pimentel during an assembly by the Cusi-led faction at Clark Field in Pampanga on Saturday.

He boasted that it was his candidacy for president in 2016 that revived the PDP-Laban.

Duterte told the assembly that Pacquiao’s designation as acting party president, replacing Pimentel, was not allowed by the party’s bylaws and Constitution.

“Koko was the one who made the mistake, not Pacquiao. Pacquiao does not know anything. He just does what he is told, he doesn’t read,” he said.

“You cannot have an acting president. You have to elect people,” Duterte said.

Cusi did not like this and the issue spiraled into “more vicious narratives of charge and countercharge,” he said.

Dormant until he came

Duterte said the PDP-Laban was dormant before he decided to run for President as its standard bearer.

“May I just remind Koko that this party PDP was asleep for a hundred years. It only woke up during the election and I ran for the presidency under the ticket,” he said.

PDP-Laban was not prominent even in the Pimentels’ bailiwick, Duterte said.

“It was a father and son party, period. And they are not even recognized in Cagayan de Oro City,” he said, adding that the younger Pimentel would not even win as barangay captain.

Duterte acknowledged that the late Sen. Aquilino “Nene” Pimentel Jr. founded PDP-Laban as a “work of love,” but said the founder’s son did not handle the party well.

What was touted as a PDP-Laban national assembly, began the process of Pacquiao’s ouster by declaring 16 party leadership positions vacant.

Among the positions declared vacant were those of the party president; executive vice president; vice presidents for National Capital Region, Luzon, Visayas, and Mindanao; secretary general; treasurer; auditor; and the chairs of the committees on membership, education, finance, legal affairs, public information, livelihood and youth affairs.

The party chair, occupied by Duterte, was left untouched.In a statement, Pacquiao, who is in the United States to train for another boxing match, lamented that Cusi and his allies had prioritized fomenting political wrangling instead of attending to more pressing problems, such as the entry of the more transmissible Delta variant of the COVID-19 virus.

“If Cusi and his group think that politics is more important at this time, it is up to them, because in the end, we will be left with one question to answer: which side will our people take?” he said.

Pacquiao did not say whether he was informed about his supposed ouster.

Speaking for PDP-Laban acting Secretary-General Melvin Matibag, who was also expelled by Pacquiao along with Cusi, lawyer Red Tuazon said the acting party president was not ousted but was merely replaced as his term had already lapsed.

Tuazon said the party supposedly wanted to formalize the replacement of those in holdover positions and to give “a fresh mandate for all.” But he did not answer reporters’ questions on why the position of the party chair was not among those declared vacant.

In a radio interview, Pimentel said Cusi had been violating the party constitution by sowing discord within the PDP-Laban to eventually nominate Davao City Mayor Sara Duterte as party standard-bearer in the 2022 presidential election.

Supporting a “party outsider” and belittling the capability and chances of the party’s homegrown talent is disloyalty to PDP-Laban, which was a sufficient ground for the expulsion of Cusi and two other party officers, Pimentel said.

He said the disputes within the PDP-Laban may have to be brought to the Commission on Elections for resolution.

Other PDP-Laban members signed a manifesto supporting Pacquiao and denouncing “personalities” behind the “illegal” national assembly at Clark Field in Pampanga.

In the online assembly by more than 100 PDP-Laban chapters nationwide, the members insisted that all party officials were elected by the party’s general membership and “not by a few politicians who are not even full-fledged party members.”

Jovel Lopez, a PDP-Laban community leader in Bulacan and a party cadre since its founding in 1982, said “party newcomers and interlopers are now trying to wrest control of the party.”

“We are wondering why we now have so many politicians who have emerged to claim that they are PDP-Laban members but we, who are original members, are now being eased out. We will not allow these hitchhikers to gain control of the party that we established,” he said.