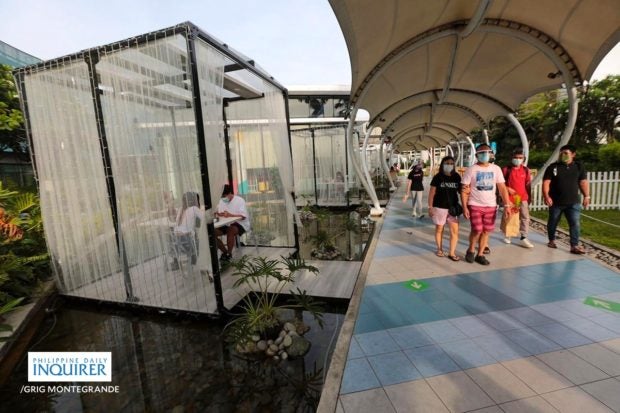 MANILA, Philippines — The independent pandemic monitor, OCTA Research group, urged the government on Saturday to roll back certain policies it had recently implemented so that the country may be able to control the spread of the more transmissible Delta variant of the coronavirus after the Department of Health (DOH) confirmed at least 11 local cases, including one death.

“OCTA’s basic position is that the national government and local government units should implement timely and appropriate responses to the real threat of Delta,” OCTA fellow Ranjit Rye told reporters.

He said there was “a need for an urgent and proactive response from the government” and for increased testing, aggressive tracing and improved treatment, in addition to vaccinations.

Rye said the Inter-Agency Task Force for the Management of Emerging Infectious Diseases should consider implementing stricter quarantine in areas where the Delta variant had been detected and “to roll back all initiatives recently implemented that could contribute greater transmissions such as social gatherings.”

Former government public health adviser Dr. Tony Leachon said on his Twitter account that the Philippine pandemic response “is too slow and lacks vigilance and proactiveness.”

“The arrival of [the] Delta variant, lack of testing, tracings and slow vaccination are solid examples of indecisive leadership,” Leachon said.

He told the Inquirer that there was a need to impose enhanced community quarantine “on every LGU (local government unit) hot spot,” noting that the Philippines was also an archipelago like Indonesia, where the Delta variant is wreaking havoc.

In an earlier briefing about variants of SARS-CoV-2, the virus that causes COVID-19, Health Undersecretary Maria Rosario Vergeire said the Delta variant could be up to 60 percent more transmissible than the Alpha variant. The Delta variant was first detected in India and the Alpha in the United Kingdom.

The DOH on Friday disclosed that 11 local cases of the Delta variant had been detected in the National Capital Region, Western Visayas, and Northern Mindanao. It said one had died and the 10 others had recovered.

Dr. Alethea de Guzman, acting director of the DOH Epidemiology Bureau, said at least one of the 11 was fully vaccinated.

De Guzman said that while there were local cases there was still no confirmed “local transmission” of the Delta variant.

The DOH defines local transmission as infection of a person by another person who had not traveled abroad.

Before Friday’s announcement that local cases had been found, the 24 earlier cases were returning overseas Filpinos.

During Saturday’s Laging Handa briefing, Vergeire said “intensive” contact tracing was under way to determine the source of the Delta variant infections in the local cases.

She said the DOH was also looking at conducting whole genome sequencing “in most areas with surges so that we can see the whole picture” of how the Delta variant was spreading.

This would involve “purposive sampling,” or getting samples from those with a high index of suspicion, she said.

Whole genome sequencing of the coronavirus is the process of determining its entire DNA sequence at a specific time. This allows scientists to observe specific characteristics or possible mutations of the virus.

With the detection of local Delta variant cases, there is a need for local governments to intensify their prevent-detect-isolate-treat-reintegrate response and for the government to improve its health system capacity, Vergeire said.

Rule on kids for review

Hospitals must be ready to expand their bed capacity and now start an inventory of their oxygen supply. Other supplies, such as drugs for COVID-19 patients, must also be prepositioned, she said.

Vergeire said the recent policy of allowing children as young as five years old to go outdoors should now be reviewed in light of the local cases of the Delta variant.

She also pointed out that any easing of restrictions was accompanied by safeguards, so the public still needed to comply with health protocols.

The recoveries and deaths left 47,257 active cases as of Saturday. Of the total, 91.8 percent were mild cases, 2.0 percent asymptomatic, 1.6 percent critical, 2.7 percent severe, and 1.87 percent moderate.