Man in daring police chase faces a slew of complaints from authorities, GRO 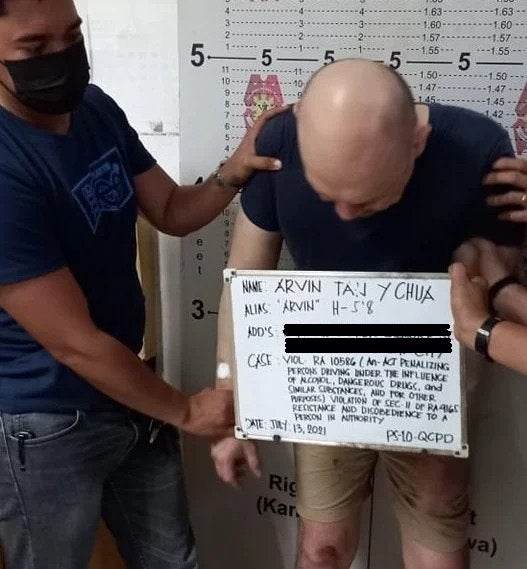 Police officers in civilian clothes hold Arvin Tan, 46, as he was being asked to pose for a mugshot on Tuesday, July 13, 2021, at a police station. PHOTO COURTESY OF QCPD PIO

MANILA, Philippines — The 46-year-old man who engaged Quezon City police officers in a daring broad daylight chase last Tuesday is now facing a bunch of complaints that include one filed by a guest relations officer (GRO).

Quezon City Police District (QCPD) said in a statement Thursday that Arvin Tan’s complaints were for violation of the Republic Act 9208 or Anti-Trafficking in Person filed by a 21-year-old GRO as well as for violation of the Dangerous Drugs Act, Estafa, Reckless Imprudence Resulting in Damage to Government Property, Resistance and Disobedience to a Person in Authority filed by the police.

These complaints were filed Wednesday before the Office of the Quezon City Assistant Prosecutor, the QCPD said.

Tan is still under the custody of QCPD Kamuning Police Station (PS 10), as of this writing.

QCPD said Tuesday’s wild pursuit against Tan stemmed from his refusal to pay his bill when he checked out from a budget hotel, demanding instead P20,000 from the hotel staff. This led to an altercation that prompted hotel employees to call the police.

When police officers arrived at the hotel, Tan managed to board his black BMW car. And the rash chase ensued, resulting in Tan ramming a QCPD mobile car and hitting a policeman as well as running into several vehicles more along the way.

READ: Non-payment of hotel bill leads to car chase from QC to Manila

Following Tan’s arrest, QCPD said its Scene of the Crime Operatives team went to the scene and recovered an opened sachet containing suspected crystal meth or shabu and an aluminum foil inside the suspect’s vehicle.

Authorities are still waiting for the result of Tan’s drug test to determine if he was positive for illegal substance use.

The police also confirmed that Tan is the same person who went on a rampage at the Manila Police District in 2017 when he was caught taking a video of a witness in the fatal hazing of a University of Santo Tomas (UST) law student.