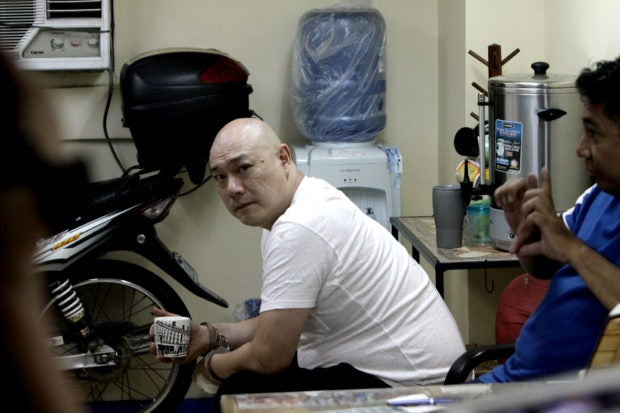 FILE Arvin Tan when he was arrested by the Manila Police District in 2017. INQUIRER PHOTO / RICHARD A. REYES

MANILA, Philippines — The man who gave policemen from the Quezon City Police District (QCPD) a wild car chase from Quezon City to Manila on Tuesday after dodging his hotel bill is now facing drug charges after police found a sachet of suspected shabu inside his car.

(During the police search of his black BMW, officers found an open sachet containing white crystals, believed to be shabu, and a small piece of aluminum foil.)

Yarra said Tan would undergo a drug test to determine whether he was under the influence of shabu.

Based on the police’s investigation, Tan checked into a budget hotel along Timog Avenue in Quezon City’s Barangay South Triangle late Monday night.

But when he was about to check out of the hotel on Tuesday, the suspect, instead of paying his bill, demanded P20,000, setting off an argument with the hotel staff, who then called the police, the report said.

Upon the arrival of police officers, Tan boarded his black BMW, bumped into a QCPD mobile car and gave them a case chase, hitting several other cars in the process.

Aside from several cases like estafa for not paying his bills, resistance, and disobedience to a person in authority, and multiple damage to property, Tan may also face charges in violation of Republic Act 9165 or the Comprehensive Dangerous Drugs Act of 2002 for drug possession.

Prior to this incident, Yarra said that Tan was involved in another case in Manila, when it was alleged that he had a mental condition.

(It was alleged that he had a mental condition in his previous incident in Manila. We are looking into that, and that is a subject of a medical examination we are doing to him.)