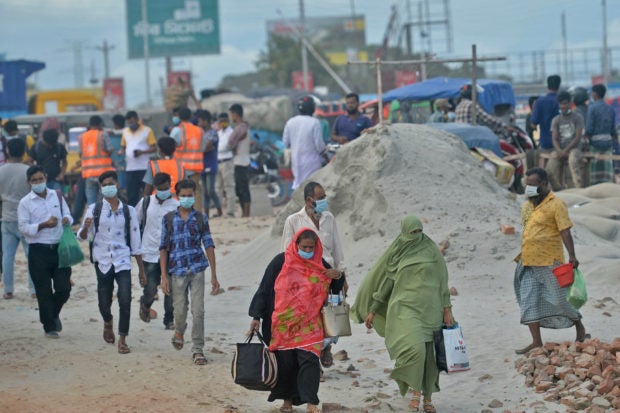 People walk to board a ferry to their hometowns after the government eased a lockdown imposed as a preventive measure against the Covid-19 coronavirus ahead of the Muslim festival of Eid al-Adha in Sreenagar on July 13, 2021. AFP

DHAKA — Bangladesh will lift its nationwide coronavirus lockdown for the country’s second-biggest religious festival, the government said Tuesday, even as new infections soared to record levels.

The cabinet said all restrictions would be eased in the Muslim-majority country of 169 million people from Thursday, ahead of the Eid al-Adha festival which will be celebrated from July 20 to 22 this year.

The removal of the curbs would “normalize economic activities” ahead of the celebrations, it added.

Tens of millions of people usually head back to their villages to mark Eid al-Adha with their families.

Bangladesh imposed its strictest-ever lockdown at the start of the month as new Covid-19 cases and deaths climbed to pandemic highs.

Under the lockdown, people were only allowed to leave home for emergencies and to buy essentials, with public transport, shops and offices shut.

But infections have continued to climb, with nearly 14,000 people testing positive on Monday — a new daily record — to take the total number of cases to just over one million.

The death toll has risen above 16,600. But experts say the real figures could be much higher amid fears of underreporting.

Mohammad Shahidullah, who heads a health committee that advises the government on how to manage the pandemic, said his group of experts opposed the easing of the lockdown.

“The committee opines that this strict lockdown should be continued till there is a declining trend in infections,” Shahidullah told AFP.

“Amid the lockdown, there is an increasing trend of infections and fatalities. The infection level is still very high.”

There are also fears that crowding at markets to buy animals for slaughter and big gatherings during the festival could become super-spreader events.

The announcement came as authorities restarted the country’s Covid-19 vaccination drive, which virtually ground to a halt in late April after imports of shots from neighboring India were suspended to meet local demand amid a massive virus surge.

The revived inoculation program kicked off on a large scale on Tuesday with two million shots of Sinopharm from China and 2.5 million Moderna doses from the United States via the Covax program.

So far, 4.2 million people in Bangladesh have been fully vaccinated with two doses of the AstraZeneca vaccine bought or donated from India.

A further 1.6 million have received one shot.

In nearby Bhutan, half a million Moderna doses arrived late Monday from the United States via Covax.

More shots are expected to be donated by Denmark, Croatia, Bulgaria, China and several other countries.

The tiny Himalayan kingdom, which has a population of 770,000, had pleaded for more shots after using up most of the 550,000 AstraZeneca doses donated by India.

It had inoculated more than 60 percent of its population with first doses in late March and early April.

In the world’s second-most infected nation India, where cases have declined from record highs in May, Prime Minister Narendra Modi warned against people flocking to northern Himalayan states to escape the scorching summer heat.

“The virus does not come and go on its own… we bring it with us when we disobey the rules. Experts are warning us repeatedly that careless behavior — like overcrowding — will lead to an increase in Covid cases,” he said Tuesday during a meeting with state leaders.

The health ministry said more than 230 million rupees ($3 million) was being allocated to an emergency package to increase the number of ambulances and ICU beds in public hospitals.