In Cotabato, farms, villages in 3 towns hit by floods 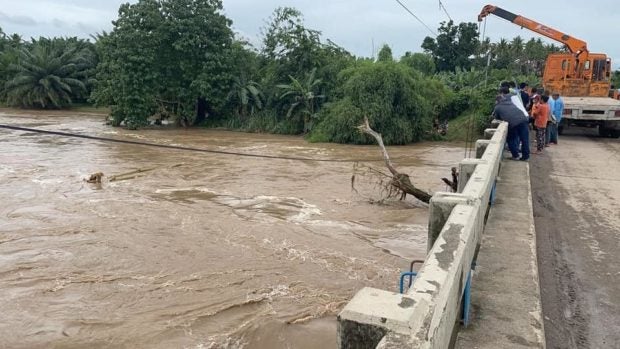 Village officials said 500 families in the rice-producing town of Kabacan and another 800 families in Barangay Malamote, Matalam town, were affected when floodwaters spawned by continuous rains hit the province on Tuesday.

Hundreds of motorists and commuters were stranded for at least four hours along the Matalam-Mlang national highway as they waited for water to recede along a 200-meter stretch of the highway connecting the two towns.

Only trucks and buses were able to traverse the highway at the height of the flooding that started at 4 a.m. Tuesday, leaving cars, motorcycles and tricycles by the roadside.

Elpidia Esparagoza, a resident of Barangay Malamote, Matalam, told a local radio station that floodwater was neck-deep at 5 a.m. Tuesday. “Now the water has receded but we fear another round of floods as rains continue in the mountains of Cotabato, Davao del Sur and Bukidnon,” she said, noting the heavy downpour in her province from 1 a.m to 6 a.m.

Hundreds of hectares of rice fields in the contiguous towns of Kabacan, Matalam and Mlang have been underwater, destroying still an undetermined amount of newly planted palay.

In Kabacan, considered the leading rice-producing town in the province, an estimated 200 hectares of rice fields have been swamped by floodwaters streaming from swollen tributaries from Matalam and Mlang.

“Once these palay fields get flooded, we consider the crops damaged, resulting in crop failure on the part of farmers,” said David Don Saure, Kabacan disaster response officer.

Most of the commuters who were stranded in the town were on their way either to the neighboring Mlang or to South Cotabato province in the opposite direction, according to acting Matalam Vice Mayor Raprap Rafael.

He said at least 20 houses, some of them near the highway in Barangay Manubuan, had been submerged although residents had yet to evacuate.

“We distributed food packs to the affected families … while we were still assessing the extent of the damage,” he said.

About 100 ha of rice fields in the Matalam villages of Manubuan, Lower Malamote and Dalapitan remained flooded, he added.