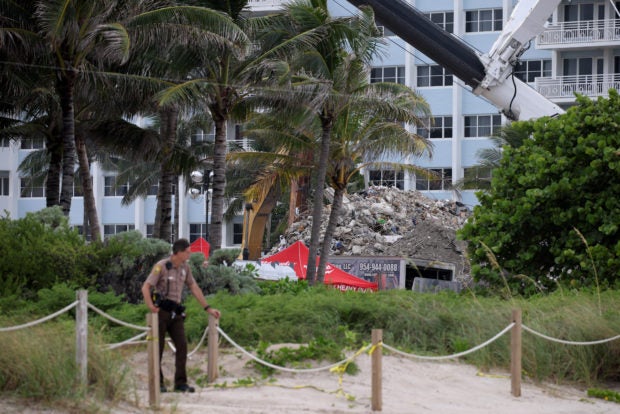 A pile of debris from the collapsed 12-story Champlain Towers South condo building is seen from the beach on July 12, 2021 in Surfside, Florida. AFP

MIAMI — The death toll from last month’s apartment building collapse in Florida has risen to 94, local authorities said Monday, though identifying the victims is becoming more complicated nearly three weeks after the disaster.

“There may be people who are deceased who remain on the unaccounted list until a positive ID has been made,” she said, as the Surfside condo recovery operation entered its 19th day.

“However, the process of making identifications has become more difficult as time goes on, and the recovery at this point is yielding human remains,” Levine Cava said.

“The process is very methodical and careful, and it does take time,” she said, asking for patience from victims’ families, who she said are in “anguish.”

The victim identification process is being carried out at the site of the collapse, with police and scientists from the county medical examiner’s office comparing DNA from recovered human remains to that of the families of those missing.

“It’s obvious that this has become much more than a collapsed building site. It is a holy site,” Surfside Mayor Charles Burkett said of the disaster zone in his small town of about 6,000 people just north of Miami.

Multiple investigations are under way to determine the cause of the sudden collapse, though preliminary findings show the building’s structure appeared degraded in spots.

A 2018 report released by city officials revealed fears of “major structural damage” in the complex, from the concrete slab under the pool deck to columns and beams in the parking garage.

The rest of the building was brought down in a controlled explosion July 4 to allow for the recovery operation to continue.

Recovery workers were making “great progress” in sifting through the tons of remaining concrete and other debris left at the site, Levine Cava said Monday, declining to give a specific timeline for the operation’s