Search called off for survivors of Florida condo tower collapse 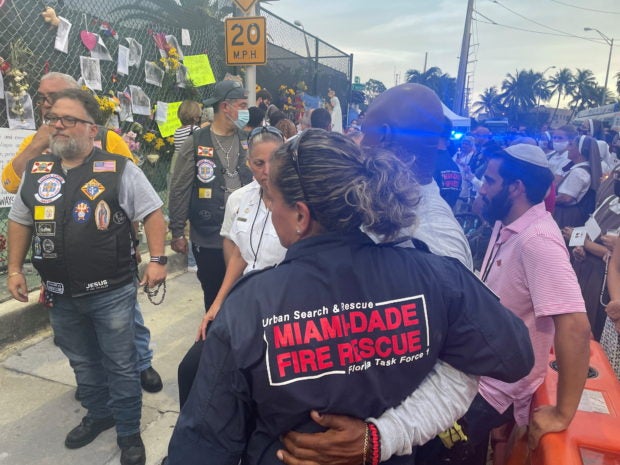 SURFSIDE, Fla.  — South Florida officials on Wednesday called off the search for survivors of a June condominium tower collapse, saying there was no longer any hope of pulling someone alive from the ruins of the flattened building.

Crews who have extracted the remains of 54 people from the mostly concrete and steel rubble of the Champlain Towers South during round-the-clock searches will transition to a recovery operation as of midnight eastern daylight time.

“At this point we have truly exhausted every option in this search and rescue operation. Nothing we can do can bring back those who are lost,” Miami-Dade County Mayor Daniella Levine Cava told an afternoon news conference.

The remains of 18 more victims were removed from the pile of debris on Wednesday, leaving 86 people still missing of those believed to have been inside the Champlain Towers South when it abruptly caved in early on June 24.

Officials say there is some possibility that some of those 86 people will be found elsewhere or have been double-counted.

But during a private briefing with family members of the victims Ray Jadallah, assistant chief of Miami-Dade Fire Rescue, said there was “zero chance” that anyone else who had been in the tower that morning was still alive inside the mountain of rubble.

Jadallah said rescue officials told family members that the way the 12-story building fell straight down, flattening the floors on top of each other, left almost no voids or spaces where a human being could have survived the impact.

No-one has been pulled out alive since the first few hours after the tower fell and no signs of life have been detected since then by sophisticated equipment or trained dogs.

Jadallah suggested during the news conference that few intact bodies were being extricated, describing the recoveries instead as “human remains.”

The pace at which crews were finding the deceased has accelerated since teams demolished a still-standing section of the building over the weekend, allowing greater access inside the ruins.

Officials toppled that section with explosives over worries that Tropical Storm Elsa could knock it down as it lashed South Florida. The disaster site saw few effects of the storm on Wednesday as it battered the state’s opposite coast.

Investigators have not determined what caused the Champlain Towers South to fall apart without warning. Attention has been focused on a 2018 engineering report that warned of structural deficiencies.

The disaster prompted officials across South Florida to study residential buildings for signs of structural weakness.

Residents of a North Miami Beach condominium, Crestview Towers, were told to leave immediately last week after engineers found serious concrete and electrical problems. They have not been allowed to return as city officials try to determine if the building can be stabilized.