Why do China, Duterte descriptions of arbitral ruling look the same? 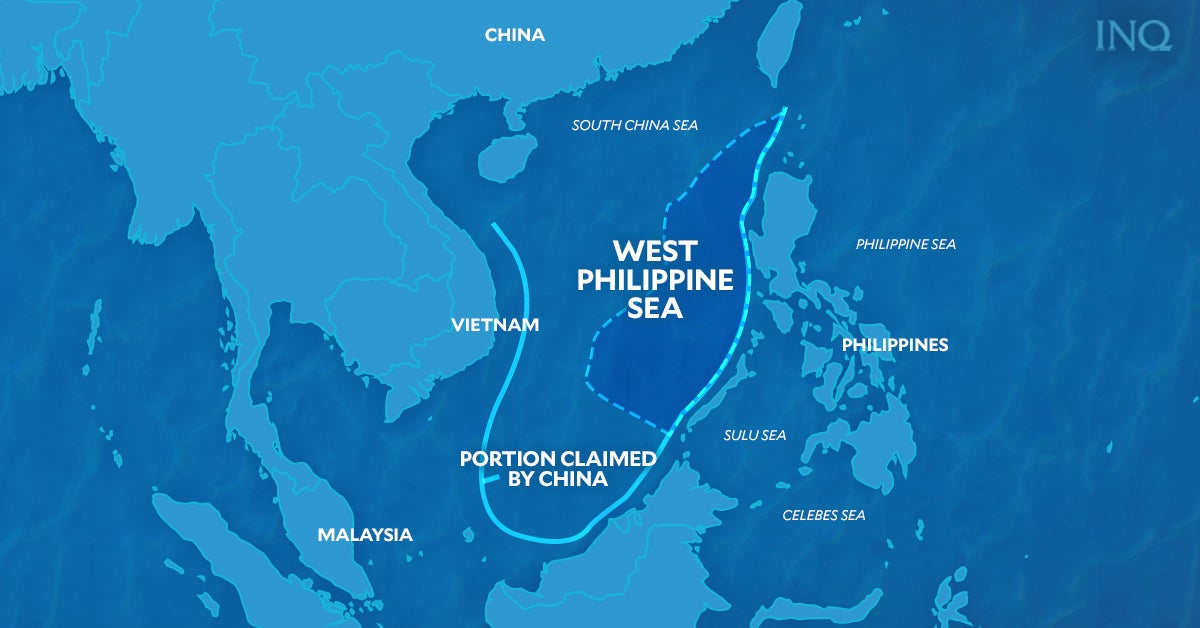 MANILA, Philippines—The Philippines’ legal victory against China’s territorial grab in the West Philippine Sea at the Permanent Court of Arbitration (PCA) has been described as a worthless piece of paper—by China and Philippine President Rodrigo Duterte.

While a display of arrogance, China’s reaction to the PCA verdict was not unexpected. But the Philippine President’s?

Calling the Philippine victory in PCA, which is based in The Hague, as just a piece of paper that cannot be enforced was just one of many statements made by Duterte on the relentless and repeated Chinese assault on Philippine exclusive economic zone.

On July 12, 2016, PCA ruled that the Philippines has exclusive sovereign rights over West Philippine Sea. China’s nine-dash line invention, the ruling said, has no legal basis.

“The tribunal concluded that there was no legal basis for China to claim historical rights to resources within the sea areas falling within the nine-dash line,” the PCA ruling said. 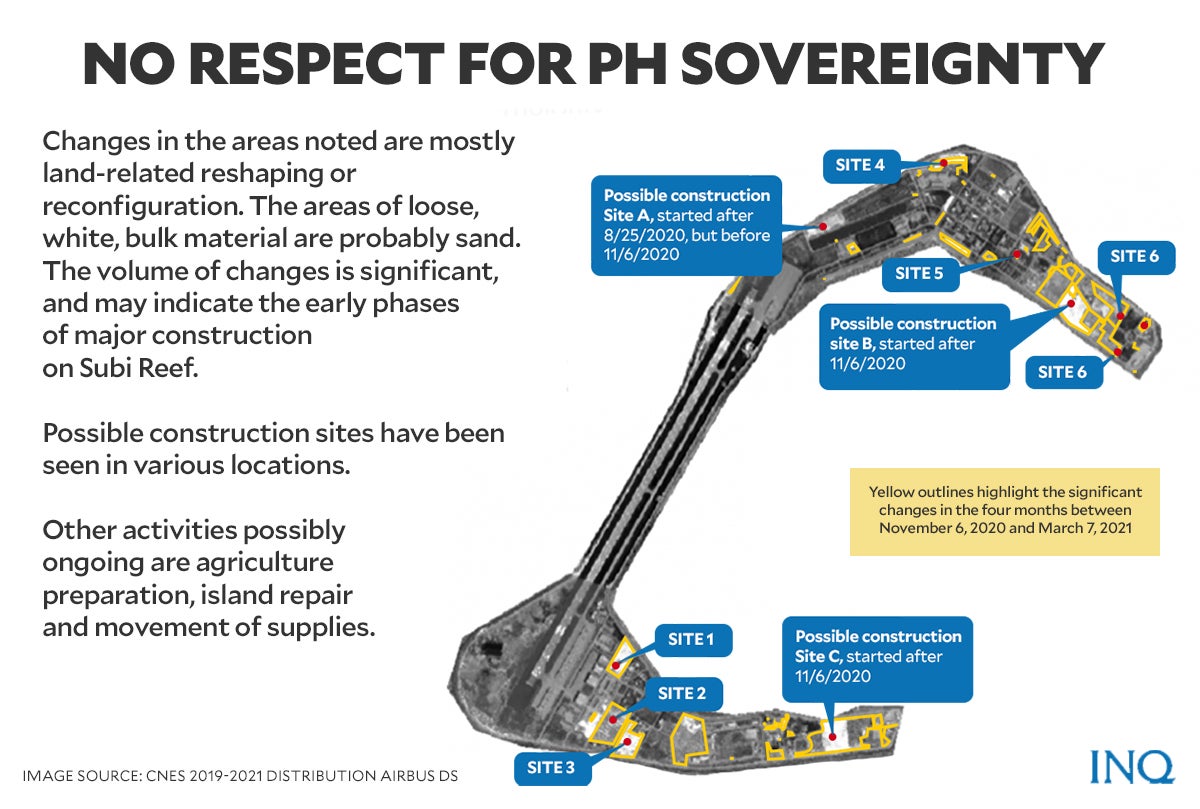 Vessels with links to Chinese militias intrude into Philippine EEZ with impunity.

Duterte critics said it was because, in the last five years, the Duterte administration refused to “invoke in strong enough terms” the PCA ruling despite overwhelming public opinion for the Philippine ruler to assert his country’s rights over West Philippine Sea.

In a July 2019 survey by the Social Weather Stations, 87 percent of respondents agreed that the “government should assert its right to disputed islands in the West Philippine Sea as stipulated in the 2016 decision of the PCA.” At least 5 percent of the respondents did not agree, while 9 percent was undecided. 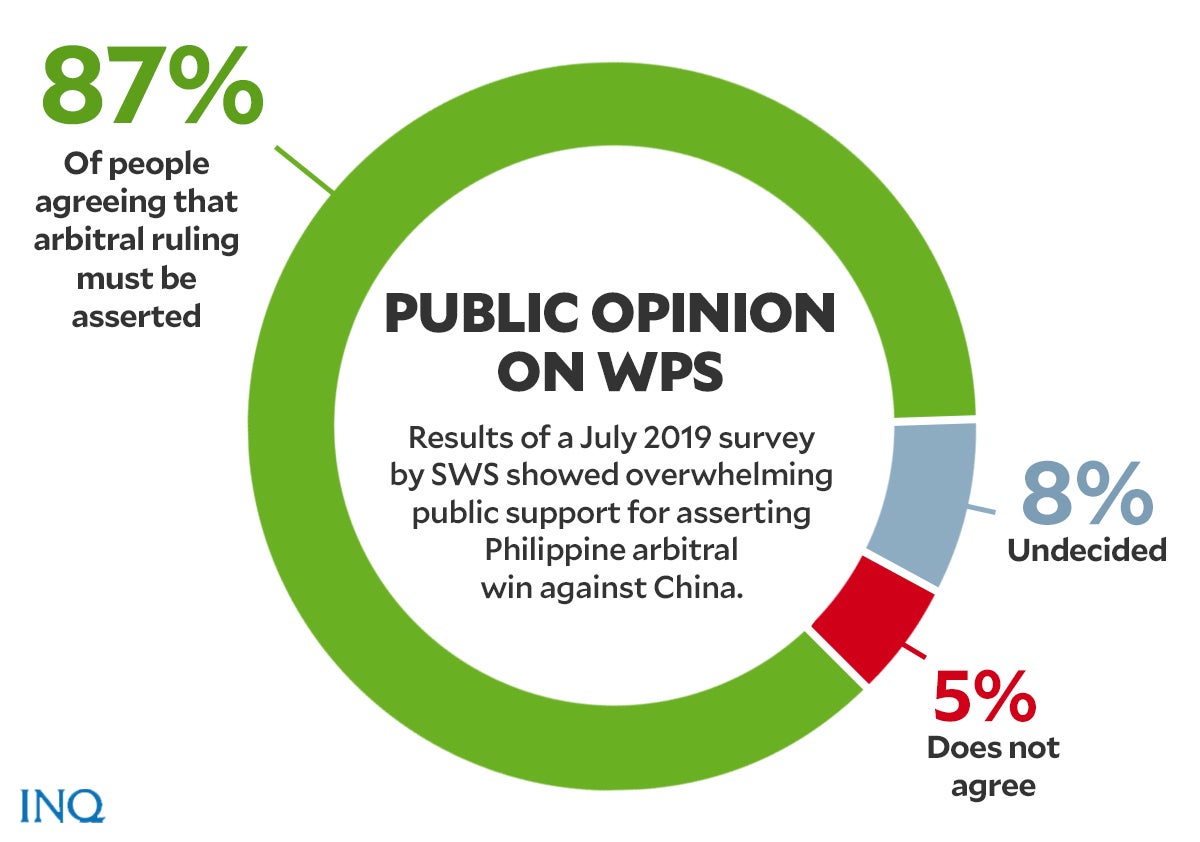 In a statement, the coalition 1Sambayan, which aims to field a common candidate for president against whoever Duterte will endorse as his replacement, said Duterte “worsened” what his critics said was an already inadequate response to China’s barefaced disregard of Philippine sovereignty and the PCA ruling. 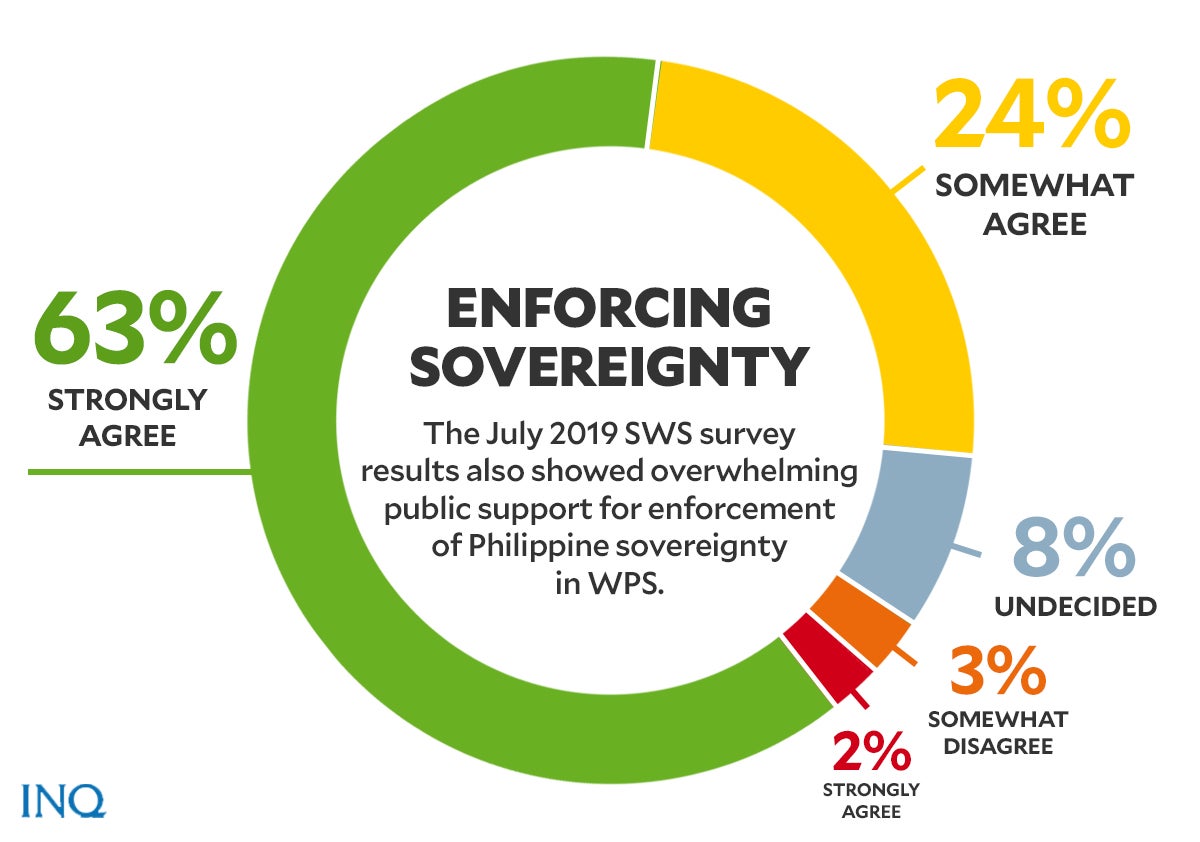 The group said Duterte’s response led to gradual erosion of what could have been a strong Philippine position against China and “a continued diminution of our maritime rights.”

A June 2021 report from Simularity’s South China Sea Rapid Alert Service said that from mid-May to mid-June, 238 “likely Chinese” ships had been spotted inside the Philippines’ exclusive economic zone (EEZ) in the WPS.

“But today, not only has the Duterte administration allowed a growing Chinese presence in WPS, but it also has—in the eyes of every patriotic Filipino—refused to assert and defend our sovereign territory and sovereign rights,” the group said.

As the Philippines marks the fifth year of its victory in PCA, it might be interesting to take another look at Duterte’s remarks on China’s intrusion:

In April 2016, months before the PCA released its decision, the then-Davao City Mayor said that if China refused to recognize it, “you have to make deals.”

“We will not insist on ownership for the simple reason that we cannot enforce our desire to own.”

In February 2016, he said that he was willing to share natural resources in West Philippine Sea with China.

“We cannot defeat you (China). We will be pulverized if we go to war. So I will just tell them, ‘If you want to talk, let’s talk. Or you might just want to open this as a mutual corridor and I will be willing to talk to you if there is oil and gas. Let us do joint exploration.”

The President, in December 2016, said that he would “set aside” the decision of the PCA because he does not want to impose on China.

“In the play of politics, now, I will set aside the arbitral ruling. I will not impose anything on China.”

This remark was later clarified by then-Foreign Affairs Secretary Perfecto Yasay, who said Duterte will not deviate from the arbitral decision.

In 2017, after his Sona, Duterte said there will be joint exploration between the Philippines and China in West Philippine Sea.

“When they start to excavate the gas and oil, I tell you it’s going to be just like a joint venture.”

At the same event, Duterte claimed that he is asserting the Philippines’ sovereign rights, saying that he has insisted on the country’s claim in front of Chinese President Xi Jinping.

In 2018, the President said that the Philippines cannot go to war against China, saying that “we will end up losing a war.”

“I cannot afford at this time to go to war. I cannot go into a battle which I cannot win and would only result in destruction for our armed forces […] In my own estimation, it would be a great loss to the nation, and probably we will end up losing a war.”

He said that he wanted to do something to “assert,” but when he assumed the presidency, “there was already this ruckus in the WPS.”

At the sidelines of the Asean Summit in Singapore in November 2018, Duterte declared that China was “already in possession” of the West Philippine Sea, saying that US military drills were creating “frictions” which derailed efforts to settle China’s territorial grab peacefully.

“China is already in possession. It’s now in their hands. So why do you have to create frictions […] that will prompt a response from China?”

In 2019, when Filipino fishing vessel “Gem-Ver” sank in West Philippine Sea after being rammed by a Chinese vessel, Duterte dismissed it as a “little maritime incident” that should not lead to war.

“Well, I’m sorry. That’s how it is […] It’s a maritime incident. Little in the sense that there was no confrontation, there was no bloody violence.”

In his 2020 Sona, Duterte said he was “inutile” and “cannot do anything” to stop China’s grab of Philippine territory.

He said, “China is claiming it, we are claiming it. China has the arms. We do not have it so it’s as simple as that. They are in possession of the property… So what can we do? We have to go to war, and I cannot afford it. Maybe some other President can, but I cannot.”

His remark was contrary to his previous claims that the government had been working to protect Filipinos’ rights in West Philippine Sea.

In one of his rarest statements asserting Philippine sovereignty, Duterte in his first address to the UN General Assembly in September 2020 declared that the Philippines has rights over parts of South China Sea.

In a reference to the PCA ruling, Duterte said: “The award is now part of international law, beyond compromise and beyond the reach of passing governments to dilute, diminish, or abandon. We firmly reject attempts to undermine it.”

Duterte, in April, said that asserting Philippine sovereignty in West Philippine Sea areas already stolen by China would only lead to violence.

“We can retake it only by force. There is no way we can get back what they call as [West] Philippine Sea without any bloodshed,”

”The Chinese government will just give you a finger. You cannot scare them because they firmly believe that it is theirs contrary to our […] opinion that it is ours.”

Last May, Duterte dismissed the Philippine victory in PCA as a “scrap of paper” saying while there has been a decision favorable to the Philippines, it cannot be enforced.

“They filed a case, we won. That paper, in real life, between nations, that paper is nothing.”

He claimed that he followed through to assert the decision: “I pursued it, nothing happened. Actually, in street parlance, I would tell you, ‘Give that to me? Son of a bitch, that’s just a piece of paper. I’ll throw it in the waste basket.”

In the same month, Duterte reiterated that the decision was “meaningless,” claiming that when the previous administration “retreated” the problem started. He was referring to a US-brokered agreement on Scarborough Shoal which required both Philippine and Chinese naval forces to withdraw from the area. The Philippines heeded the agreement. China did not.

Talking to former senator Juan Ponce Enrile, he said, “Since then, the paper works about the arbitral award has become meaningless […] The opposite camp of the political side is saying that I should do my very best in asking the UN.”