Over P10-B in aid missing? Pacquiao is ‘punch-drunk’, says Duterte 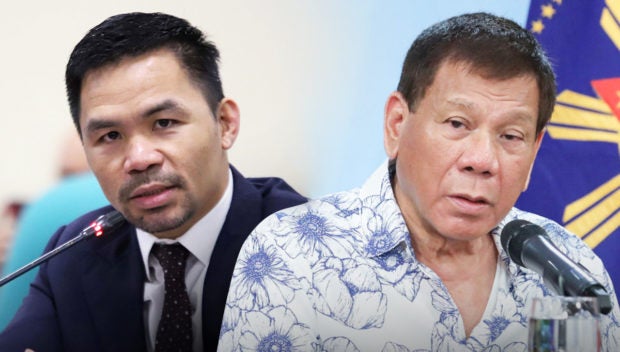 MANILA, Philippines — “Punch-drunk” or someone who has received several heavy blows to the head.

This was how President Rodrigo Duterte described Sen. Manny Pacquiao after the boxing champ claimed that P10.4 billion funds from the social amelioration program were missing.

Duterte once again took a jab at the senator over the latter’s claim of corruption in several government agencies.

“My friends, don’t believe that P10 billion is missing,” Duterte said, speaking in Filipino, during his weekly taped briefing that aired on Monday night. “I have a term for that. It is not mine. I just borrowed it. But I think Pacquiao is punch-drunk.”

“To be talking about P10 billion from nowhere, will I allow, will we allow, will the secretaries of the department allow that something like that will be missing? P10 billion. That is a statement coming from a guy who is punch-drunk. Drunk,” the president added.

Pacquiao earlier said that Starpay, an e-wallet application used by the Department of Social Welfare and Development (DSWD), had failed to fully distribute the aid under the Social Amelioration Program (SAP) — with P10.4 billion missing even though it was noted that all of the payouts had been completed.

According to Pacquiao, only 500,000 of the 1.8 million beneficiaries were able to get the aid. The remaining 1.3 million, the senator said, did not receive anything.