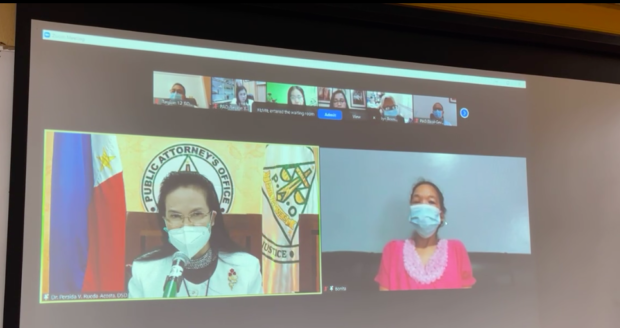 PAO Chief Persida Acosta and househelp Bonita Baran during a virtual press conference. PAO, who represented Baran announced that the Supreme Court’s ruling affirming the lower court’s guilty conviction against those who maltreated her. SCREENSHOT of Monday’s virtual presscon.

MANILA, Philippines–The Supreme Court has dismissed the appeal filed by a couple found guilty of detaining and injuring their maid Bonita Baran from 2007 to 2012.

In a resolution made public Monday, the high court affirmed with modification the finding of guilt and penalty imposed to Reynold Marzan, the husband of Anna Liza.

Baran was hired as a maid in 2007. In her years of service, she suffered various injuries including one that caused her right eye to go blind.

The coupled denied maltreating Bonita, saying she was being treated well as part of the family.

The case was elevated to the Court of Appeals who affirmed the lower court’s ruling prompting the couple to take the case to the Supreme Court.

In its resolution, the high court dismissed the case against Anna Liza because of her death on June 22, 2020. Meanwhile, Reynold’s case was elevated from being an accomplice to the principal in the crime.

The high court explained that Reynold conspired with Anna to commit the crime of serious illegal detention citing records of the case where Reynold would lock the main door whenever Anna Liza would lock Bonita inside any of the house rooms.

“Clearly, Reynold was not an innocent bystander in this case. Not only did he know about Anna Liza’s repeated acts of detaining Bonita inside the rooms of their residence, he himself actively participated therein each time by also locking the main door of the house,” the high court’s Court 2nd Division said.

The high court also ordered Reynold to pay Bonita a total of P225,000 for moral, exemplary damages, and civil indemnity.

She also ordered the PAO office in Catanduanes, Bonita’s hometown to assist in her medical examination. During a virtual press conference, Bonita’s relatives said she has lost her appetite, rarely talks, and now has problems with her left eye.

Maltreated maid claims being locked up for 3 years

Maltreated maid who lost eyesight gets justice after 5 years