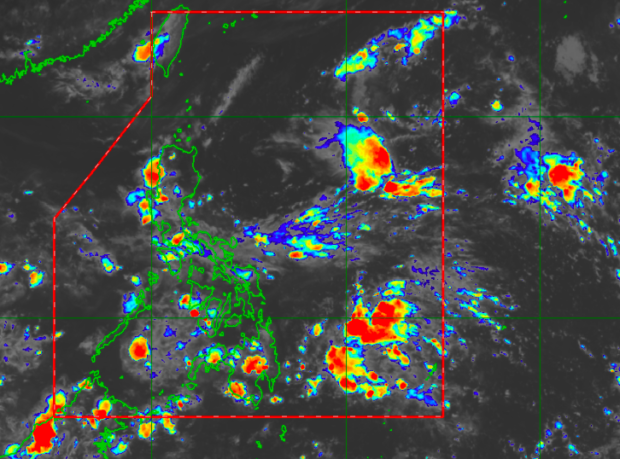 MANILA, Philippines — Aside from the monsoon break, state meteorologists said that easterlies or warm winds coming from the Pacific Ocean generally seen during the dry season contribute to the hot and humid weather across the country.

Weather reports from the Philippine Atmospheric, Geophysical and Astronomical Services Administration (Pagasa) showed cloud clusters coming on from the east, while the western side of the country remains clear.

According to Pagasa, the easterlies may also bring isolated thunderstorms and rain showers for the country’s eastern side, especially by afternoon and nighttime.

(Hot and humid weather would continue for most of the country because of the easterlies or the warm winds from the Pacific Ocean.)

(These easterlies also cause cloudy skies over a huge part of the country’s eastern section, which would be accompanied by possible light to moderate rains and at times heavy rains due to thunderstorms.)

The areas that may be affected by thunderstorms from Monday night to early Tuesday morning include the provinces of Albay, Catanduanes, Camarines Norte and Camarines Sur in Bicol Region; Marinduque and Quezon province in Southern Luzon; and Aurora in Central Luzon.

Due to the thunderstorms, Legazpi would have slightly lower temperatures on Tuesday, playing around 26 to 31 degrees Celsius.  In comparison, Metro Manila, Laoag, and Puerto Princesa would have something between 25 to 32 degrees, and Tuguegarao with 25 to 36 degrees.

No gale warning has been raised over any part of the country’s waters, as sea conditions would be slight to moderate in all seaboards.  Also, Pagasa said that it does not expect any weather disturbance to enter the Philippine area of responsibility in the next two to three days.