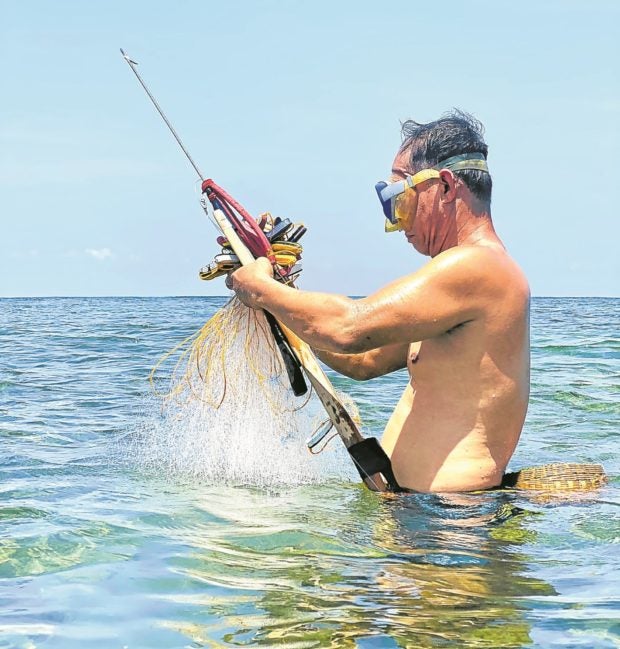 NO FANCY GEAR Dante Noces, one of the pioneers of sea urchin cultivation in the village of Paraoir in Balaoan, La Union province, and other fishermen in his community do not need modern or fancy fishing gear so they can sustain their families. —PHOTOS COURTESY OF RICHARD NOCES

SAN FERNANDO CITY, La Union — If you enjoy a plate of sea urchin gonads (roe), it’s likely that these have been harvested from the community of Paraoir in Balaoan, La Union province.

Residents in this coastal village facing the West Philippine Sea have succeeded in culturing the urchins in cages and later in growing them in an open seabed, in a method they call “sea ranching.”

It also helps that the town’s waters is abundant in sargassum, a variety of seaweed that sea urchins eat. As such, no commercial feed is introduced to the marine environment and the industry is ecologically friendly.

Sea urchin farming has turned the lives of the villagers around — from the absence of economic opportunities to being able to send their children to college, build modest houses and buy tricycles.

But it was only some 19 years ago that residents saw the potentials of culturing sea urchins that are highly prized for their gonads — that creamy and briny part found inside the spiny, round marine animals.

For decades, sea urchins used to be bountiful in Balaoan. They were so abundant that it was almost impossible to walk on the coast without getting pricked by their spines, said Dante Noces, 56, a resident and the head of the town’s Fishery and Aquatic Resources Management Council.

But a major typhoon that hit the town in the early 1980s washed the sea urchins away until, over time, they were gone.

“We could not harvest even 10 pieces in areas where sea urchins used to abound,” Noces said. 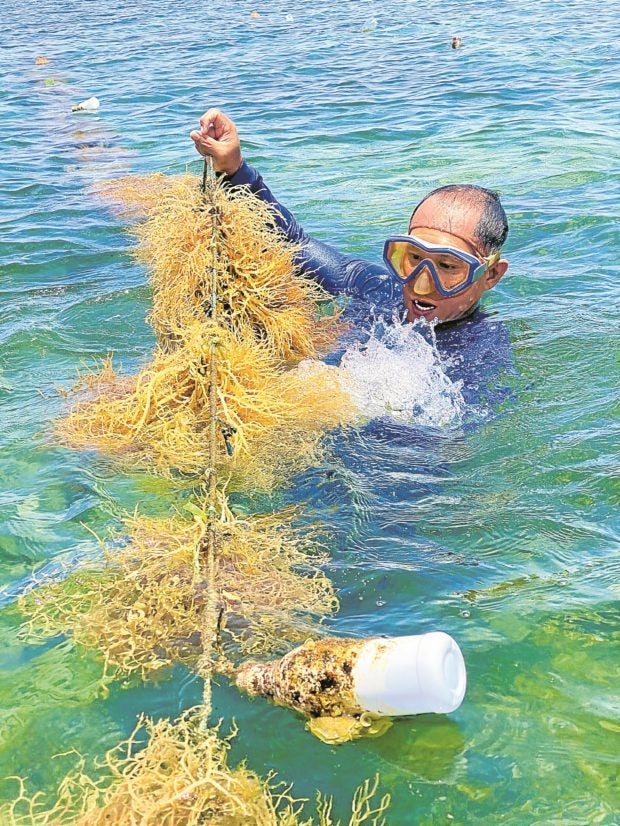 URCHIN FOOD The waters of Balaoan are rich in seaweed that is natural food for sea urchins.

In 2002, villagers started to restock their seawater with 250 pieces of sea urchin as part of the clean and green program launched by the municipal government, according to Noces, a former village councilman of Paraoir.

When the inspection team visited the village, Noces recalled suggesting to the group if they could come up with a project to repopulate their waters with sea urchins.

The BFAR trained the fisherfolk organization headed by Noces on sea urchin culture and launched a commercialization project funded by the Bureau of Agricultural Research.

Rosario Segundina Gaerlan, officer in charge of the BFAR in the Ilocos region, said the agency assisted the fisherfolk in developing designs of cages to determine which could withstand strong waves, and seeded the protected area with baby urchins to increase its population.

The idea to develop their own sea urchin farm started when Noces and some villagers visited Sta. Maria town in nearby Ilocos Sur province to buy 250 pieces of marketable urchins, meaning they were heavy with roes and ready to spawn. 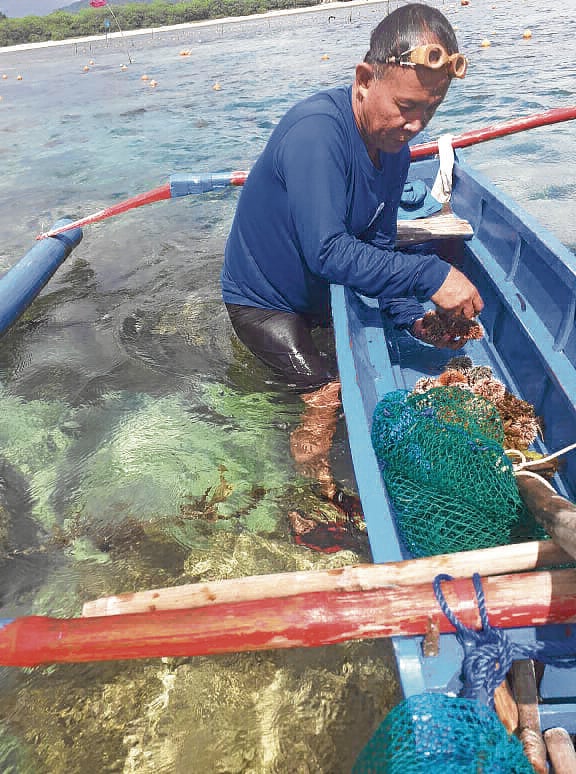 LIVELIHOOD SOURCE Sea urchins are cultured in cages on a seabed in Balaoan, La Union. Dante Noces says he started with a stock of 250 pieces of sea urchin as local fisherfolk turn to
its production to supplement their income from fishing in the 2000s.

“We put them in a cage, and I was charged with taking care of them for seven months. When we saw copious tiny urchins in the area, we urged the other residents to organize and culture them in cages themselves,” Noces said.

But the plan was met with skepticism from fisherfolk who did not believe that urchins could be cultured.

To show that the project could be done, the proponents bought all the urchins that came out of the cage, even the tiniest ones, at P1 each.

“We put the little urchins in two cages which we borrowed from the DMMMSU,” Noces said.

The DMMMSU had a sea urchin culture project but did not pursue the venture.

The fishermen put 125 urchins in each of the two cages that were placed in a space thick with sargassum some 200 meters away from the shore. They soon grew in number.

Finally, the other residents were convinced of the project’s viability.

But when the sea urchins were already repopulating quickly, a typhoon hit the area and damaged the cages. “Nakalbo pa ang mga urchins (The urchins lost their spines),” he said, adding that without the spines, the urchins die.

Fortunately, the baby urchins in the seabed survived so the fisherfolk had stocks to start all over again.

The project took off after that, prompting residents to organize the Paraoir Fisherfolk Association, with the local government and the BFAR providing them with cages.

The community-based industry is already sustainable, with around 80 fishermen active in the urchin culture not just in Paraoir but also in nearby Almeda village. A kilo of sea urchins, about 10 to 12 pieces, sells for P100.

The fishermen are now engaged in sea ranching: growing the urchins in designated sea space (each fisherman is given a 36-square-meter area separated by ropes) and collecting them in cages when they are of marketable sizes.
The fishers now have a ready source of income, Noces said.

“It is not as if they got rich. But if they need money to buy something, they go to their cages, gather several kilos of urchin and sell them. Many of them also have regular buyers who come to the village,” he said.

But everything is not always well in the project, which is susceptible to environmental factors like low dissolved oxygen, low tide, hot weather and sudden rains.

“For the past seven years, we have been dealing with climate change. Last year, we lost around 50,000 pieces and this year, the stock is limited because of low dissolved oxygen in the sea and the heat,” Noces said.

He added: “Even other marine animals in the wild, like sea cucumbers and octopus, are floating dead.”

But for as long as there are surviving baby urchins in the wild and in the cages, the fishermen are hopeful that their industry will recover.

They are waiting for September when the urchins will start to spawn, grow and be ready for the market.