What started as a random act of kindness has sparked hope online after a netizen posted her heartwarming encounter with a complete stranger who had asked for help, which made her appreciate more what she has in life.

In a lengthy Facebook post, Yana Diaz Mostajo, 25,  narrated what happened when she and her friend Yowie Lyn were about to withdraw money from an automated teller machine (ATM) in NGI, Barangay Parang, Marikina last July 1.

“Today, I encountered Jesus!” Mostajo wrote at the beginning of her post. She was referring to the elderly man named “Tatay Ben,” whom she saw standing at the side of the long queue while holding an ATM card and a piece of paper, probably trying to look for someone who could assist him with his concern.

When it was their turn, Mostajo said the elderly man suddenly approached them and asked for help in withdrawing his remaining funds from his ATM card as he did not know how to operate the bank machine.

“Tulungan niyo naman ako niyan, hindi [kasi] ako marunong mag pindot pindot [niyan] eh (Please help me with that, since I do not know how to properly press those keys),” the elderly man said.

Tatay Ben told them that he was trying to withdraw his monthly pension as he would use it to pay off his debts. He asked them to check the amount left on his bank account, which turned out to be less than P3,000, and requested to withdraw it all.

In her post, Mostajo also wrote that while they were withdrawing the money, the elderly man kept on telling them stories like what happened with his ATM card before. He said that a bank security guard got mad at one time and scolded him after his ATM card got stuck inside the machine.

Then, as soon as they finished, Tatay Ben thanked them and he even tried giving them P100 to repay the favor.

Surprised by the elderly man’s gesture, Mostajo recalled how Tatay Ben did not even bother to count his money first before offering them money for helping him. 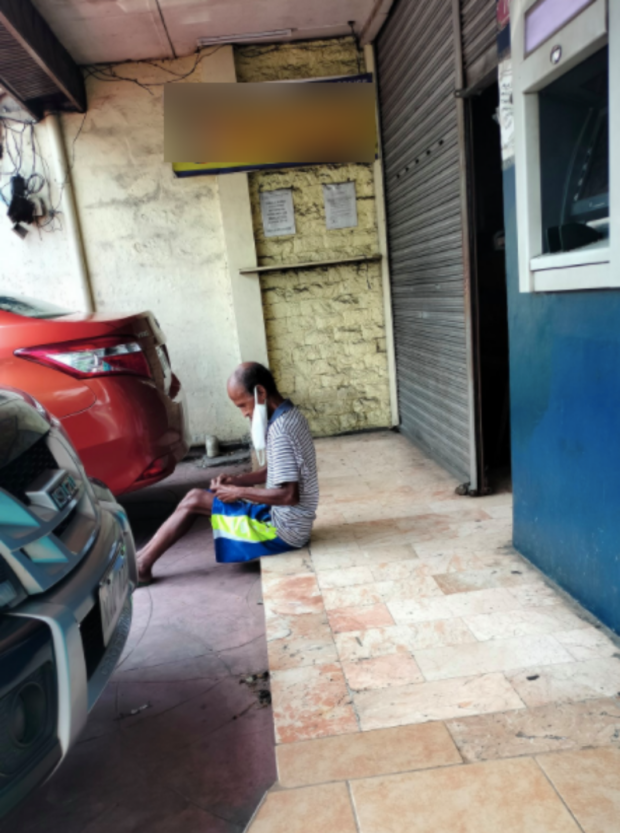 Tatay Ben sits on the floor to count his money after asking help from Yana Diaz Mostajo to withdraw his pension from his bank account last July 1. Image: Courtesy of Yana Diaz Mostajo/Facebook

“We were just stunned [by] what he did and declined politely. After that, he sat down somewhere, counted his money, and put it inside his wallet,” Mostajo said.

“We tried to give him P100 and he even hesitated to take it, [but] of course we insisted. Although we know it may not be too much, his smile simply told us it is enough,” she added.

The encounter had left Mostajo in awe and wrote in her post, “Si tatay na [tila] walang wala at kakarampot lang [na pera] ang meron siya, magbibigay pa dahil lang tinulungan namin siya mag withdraw (Tatay Ben, who seems to have nothing and has only a little amount of money, would even give us some of it just because we helped him withdraw)?”

“Eh ako nga kahit kakilala na [ang humihingi ng tulong], minsan ang hirap pa rin magbigay (As for me, even if I know someone who asks for help, it is still hard to give). But to Tatay’s side, we were complete strangers, and yet, [he] was willing to give even if he does not have enough,” Mostajo went on to say.

Further, Mostajo recalled the many times she tends to question God’s plan, has a scarcity mindset, and how she often asks, “Why do I feel like I do not have enough?”

The life-changing gift of helping people