A security guard at a condominium in Ermita, Manila who aspires to become a lawyer, received a surprise gift from a resident in the building he works in.

Johnny Abbang Jr., 31, was surprised by Atty. Keij Ejercito on Sunday, Sept. 13, when Ejercito gave him a new law book as she was inspired by Abbang’s dedication to learning during his spare time.

When Abbang found out that Ejercito is a lawyer, he started asking her some clarificatory questions whenever she passes by.

“Minsan nagugulat na lang ako kasi parang may pa-[recitation] [sa akin si Sir Abbang]! (Sometimes I get surprised because Sir Abbang seems to be doing a recitation with me!) That’s how we became close,” Ejercio stated in her post.

According to Ejercito, Abbang plans to enroll in a law school, but for some reason, he does not think he could do it now, so he said he would just continue reading law books first. Abbang is originally from Masbate, but he is currently living in Fairview, Quezon City, with his family while his mother and siblings are living in Tondo.

(He is a graduate of Criminology. He cannot get his Transcript of Records (TOR) because he still has fees to pay in school. So since it has not been settled yet, he could not get a TOR. Then he said, he also cannot afford the tuition fee in the law school.)

When asked how Abbang found out that she is a lawyer, Ejercito told INQUIRER.net, “I really can’t remember [how did he know]. I think he saw me at the Senate hearing on TV one time, and then that was it. I confirmed to him that I am a lawyer.”

(Whenever I pass by and he is reading something, [he] likes to ask questions. He will stop you and then he has an on the spot legal clarificatory question. Maybe because there are confusing details in the book since he was just self-studying. So I was surprised sometimes because his queries sound like bar questions.)

To encourage Abbang to keep pursuing his dreams, Ejercito decided to give him a new law book on Sept. 13, with Abbang’s name engraved on it and a note which read, “Para sa future abogado ng bayan.” 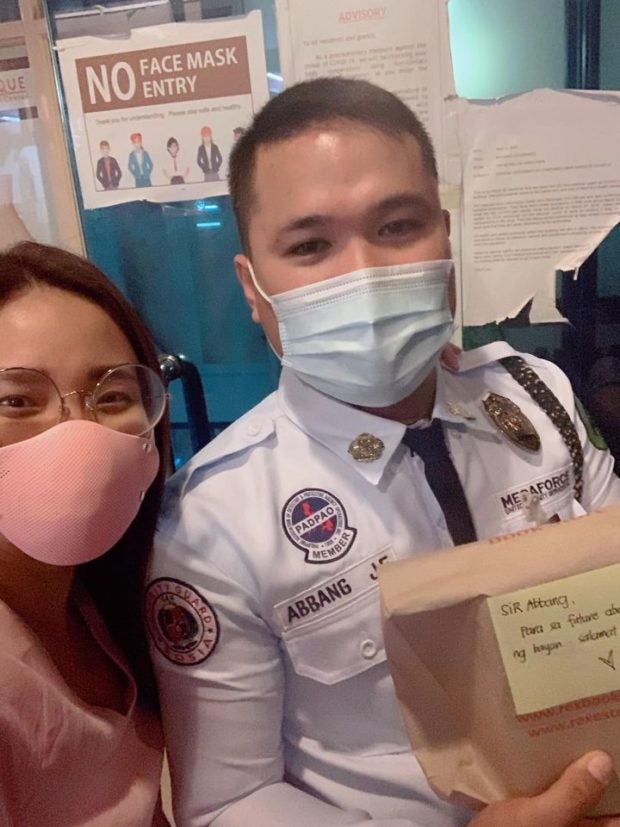 Johnny Abbang Jr. was surprised by Atty. Keij Ejercito, with a new law book on Sunday, Sept. 13, as she was inspired by Abbang’s dedication to learning during his spare time. Photo courtesy: Keij Ejercito/Facebook

“Sabi ko, ituloy na niya [ang pag-aaral]. Kahit [pagkuha ng] paunti-unting units. Sayang naman kasi [ung oportunidad], lalo’t marami na siyang nabasa. [I] told him na hindi ito paunahan. Ang mahalaga [ay] matapos niya (I told him to continue with his studies. Even by taking units little by little. The opportunity may be wasted, especially since he has read a lot. I told him it is not a race, what matters is for him to finish),” Ejercito said as she recalled the day he handed her gift to Abbang.

Moreover, during one of their conversations, Ejercito said Abbang was amazed when she told him that even she is not rich and encouraged him to fulfill his ambition.

“Working student din ako noon at iginapang ko ‘yang law school. It took me 6 years to finish it (I was also a working student before and I went to law school),” Ejercito said, adding, “Ayun, nagulat siya. Sabi nya, sige daw at baka siya na nga ang pag-asa ng pamilya nya (There, he was surprised. He said he would do so and maybe he is the hope of his family.)”

Ejercito’s Facebook post has already gone viral and has garnered over 89,000 reactions, 44 comments, and over 30,000 shares, as of writing. She also hopes that Abbang’s story would serve as an eye-opener to those who are privileged and, at the same time, be an inspiration to those who have less in life to pursue their dreams.