Woman being chased by police orders at drive-thru during pursuit, gets caught | Inquirer News

Woman being chased by police orders at drive-thru during pursuit, gets caught 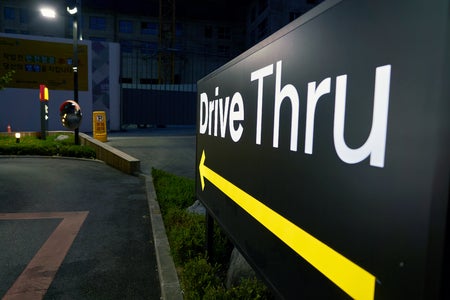 A woman being chased by police tried ordering at a fast-food chain’s drive-thru during the pursuit in Massachusetts in the United States, which led to her getting caught.

The suspect, 38-year-old Johanna Gardell, was pursued by Worcester police after she allegedly stole a pickup truck last Tuesday, July 6, as per ABC News the next day.

The owner of the pickup truck reported the incident to police on Tuesday morning, stating that a woman he did not know climbed into his car and drove away.

Police were able to track Gardell down, however, as the vehicle had GPS, according to the report. When they arrived at Gardell’s location, however, she apparently “drove away as the officer walked toward her,” according to the Worcester Police Department.

Gardell was then chased by a police cruiser, but began increasing speed and drove through red lights, the report said. Police were forced to stop the chase for safety reasons.

The suspect eventually came upon heavy traffic and drove into a van, forcing her to slow down. When police approached her again, however, she struck the officers with her car and began driving away again.

“She backed up the vehicle at a high rate of speed and struck a cruiser behind her, and knocked down and dragged one of the detail officers. Officers pursued the stolen vehicle at a low rate of speed before the pursuit was called off for safety reasons,” the police department was quoted as saying.

Gardell eventually passed through a McDonald’s drive-thru and tried ordering food, but was located again by police. She reportedly intentionally struck an officer again with the stolen truck and tried fleeing again.

Gardell, however, immediately got stuck “in a pile of mulch” that was on the restaurant’s property, according to the report.

She was then caught, but was described to have fought and struggled against officers as she was being arrested. Gardell now faces a number of charges including failure to stop for police, leaving the scene of an accident with personal injury, assault and battery by means of a dangerous weapon, malicious mischief to motor vehicle, disturbing the peace, disorderly conduct and use of motor vehicle without authority, among others. Ian Biong /ra