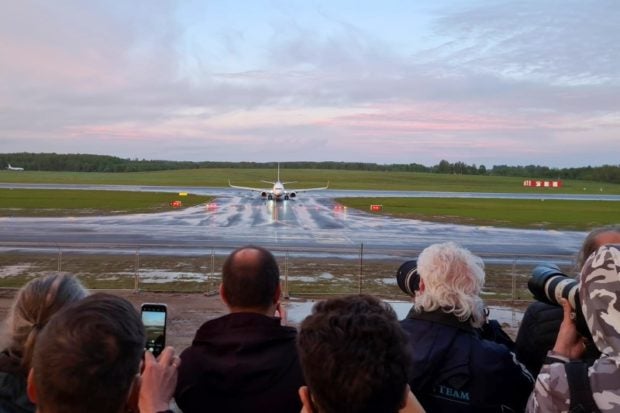 FILE PHOTO: A Ryanair aircraft, which was carrying Belarusian opposition blogger and activist Roman Protasevich and diverted to Belarus, where authorities detained him, lands at Vilnius Airport in Vilnius, Lithuania May 23, 2021. REUTERS/Andrius Sytas

WASHINGTON — The U.S. Transportation Department finalized an order on Tuesday banning ticket sales for air travel between the United States and Belarus, acting after Minsk forced a Ryanair flight to land and arrested a dissident journalist who was aboard.

The department on June 29 had issued a show cause order proposing the restrictions after the U.S. State Department determined that limiting travel between the United States and Belarus was in Washington’s foreign policy interest in light of the diversion of the Ryanair flight.

The order, which is effectively immediately, also applies to “interline” travel in which tickets are purchased through one airline that contain flights operated by multiple airlines.

Under consideration by the U.S. government for several weeks, the order is mostly symbolic since relatively few tickets are purchased for travel to Belarus from U.S.-based travel services.

The Air Line Pilots Association (ALPA) said in written comments it strongly supports the action, adding the “aggressive and unwarranted interception of a passenger aircraft over Belarus is a flagrant violation of Belarus’s obligations … and flaunts accepted norms of international behavior.”

apologetic resolution by Belarus. A message should be sent that aggressive action against civil aircraft will be met with a swift and appropriate response to deter similar conduct by any other would-be state actors.”

After the May 23 forced landing of the Ryanair flight, which was en route from Athens to Vilnius, the U.S. government advised passenger airlines to use “extreme caution” when flying over Belarus. At the time, however, the United States stopped short of imposing any restrictions.

The order allows the U.S. government “to make case-by-case exceptions for any transportation deemed to be in the national interest of the United States, including on humanitarian or national security grounds.”