Coping with COVID: A virus that’s likely to stay 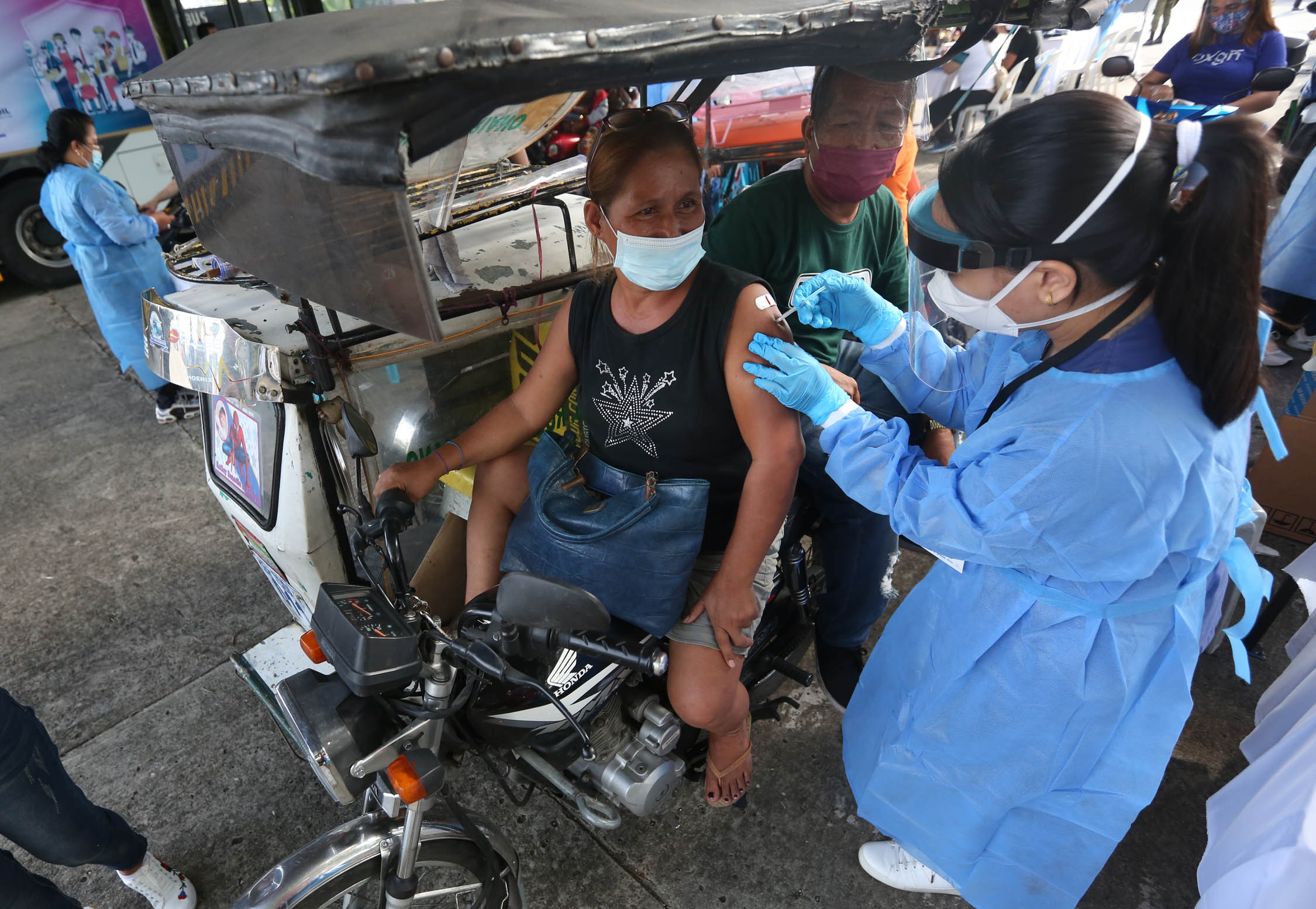 LENI-ISKO ‘TEAM-UP’ Tricycle and pedicab drivers, as well as delivery riders, turn up at a COVID-19 vaccination site opened at the Cultural Center of the Philippines complex in Pasay City on Tuesday, an initiative of Vice President Leni Robredo in partnership with Manila Mayor Francisco “Isko Moreno” Domagoso. —MARIANNE BERMUDEZ

MANILA, Philippines—As COVID-19 cases reach more than 100 million worldwide with nearly 4 million deaths, countries have been struggling to vaccinate their population hoping to stop SARS Cov2, the virus that causes the disease, and its variants from further wreaking havoc.

But what if the collective effort to vaccinate and implement preventive measures were not enough to make the virus disappear?

Recent research and studies suggested that SARS Cov2, once thought to linger for only weeks or months at the pandemic’s onset, may be with us for good.

The possibility is not remote for the SARS Cov2 to become a “forever virus”, according to experts, and this could rearrange the way the Philippines and other countries respond.

At one of his recent public addresses with his Cabinet, Philippine President Rodrigo Duterte cited Finance Secretary Carlos Dominguez III about the possibility that SARS Cov2 could become “endemic,” or of regular occurrence.

It was not clear where Duterte’s theory, supposedly coming from Dominguez, came from but experts studying the virus have suggested that it was not impossible.

From pandemic to endemic
Aside from increasing infections, the emergence of different variants, lack of vaccine supply, vaccine hesitancy among people and gaps in local and international response point to a possibility of SARS Cov2 staying with us for a longer period, according to a report in the Foreign Affairs Magazine.

“Rather than die out, the virus will likely ping-pong back and forth across the globe for years to come,” said American epidemiologist Larry Brilliant in the report. Many other health experts shared Brilliant’s view.

As early as May 2020, World Health Organization (WHO) emergencies director Dr. Mike Ryan had already warned that the virus might never disappear.

“It is important to put this on the table: this virus may become just another endemic virus in our communities, and this virus may never go away,” Ryan said at an online press conference that time.

This means that the virus causing COVID-19 disease might continue to spread among populations across the world.

In a January survey conducted by Nature, a peer-reviewed science journal, majority of the respondents—immunologists, infectious-disease researchers, and virologists—agreed that the coronavirus will eventually be classified as endemic. 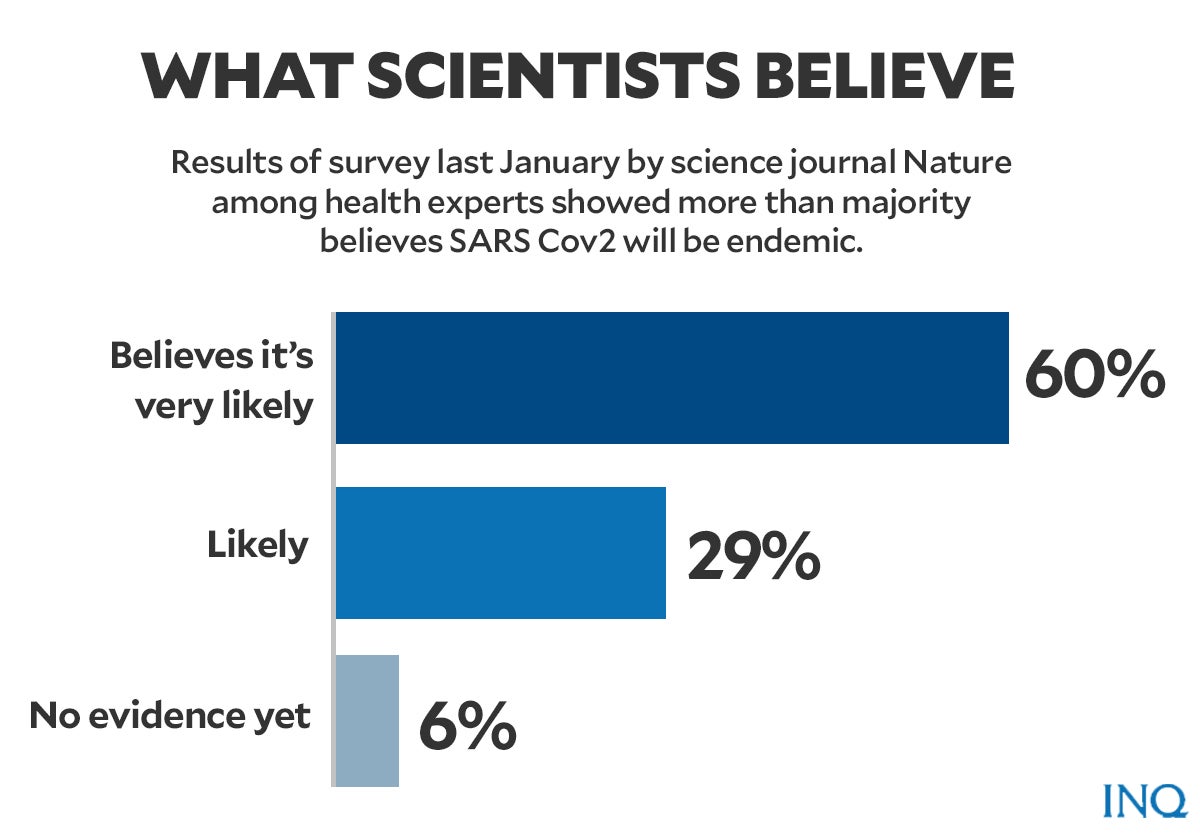 Angela Rasmussen, a virologist from Georgetown University, told Nature News that while there is the likelihood that the virus will become endemic, it is hard to predict the pattern it will take.

Several respondents believed that some regions might be able to eliminate the virus, though.

“I guess COVID will be eliminated from some countries, but with a continuing (and maybe seasonal) risk of reintroduction from places where vaccine coverage and public-health measures have not been good enough,” said Christopher Dye, epidemiologist at the University of Oxford.

While the probability of SARS Cov2 COV-2 becoming endemic sounds terrifying, Nature clarified that the failure to get rid of the virus does not necessarily mean more deaths, severe cases and longer social isolation.

“The future will depend heavily on the type of immunity people acquire through infection or vaccination and how the virus evolves,” wrote Nicky Phillips, Asia-Pacific bureau chief for Nature News.

“Influenza and the four human coronaviruses that cause common colds are also endemic,” Phillips said.

“But a combination of annual vaccines and acquired immunity means that societies tolerate the seasonal deaths and illnesses they bring without requiring lockdowns, masks, and social distancing,” Phillips added.

A 2013 study published in BMC Infectious Diseases showed that between the ages of three and five, most children are exposed to four endemic human coronaviruses—OC43, 229E, NL63, and HKU1— among the first few infections that children get.

Initial infections from these viruses boost the future immune response and help fight off other variants of coronaviruses — not to eliminate them but to keep the individual from getting seriously ill.

If SARS Cov2 becomes endemic and copies the behavior of those four coronaviruses, it will be “no more virulent than the common cold,” said a study by Emory University infectious disease researcher Jennie Lavine and colleagues.

Immunological characteristics govern the transition of COVID-19 to endemicity

Evolutionary biologist Jesse Bloom said that the current coronavirus might, later on, turn into a flu virus.

“I do think SARS Cov2 will become a less serious problem and something like flu,” he told Nature News.

Aside from COVID-19 prevention methods, countries are relying on widespread immunity which can be achieved through vaccination.

However, people were reminded that the vaccine alone will not be enough to eradicate COVID-19.

“Current evidence shows that the existing COVID-19 vaccines are effective at stopping disease, especially severe disease, but we still don’t know if they prevent people from becoming infected with the virus,” said Dr. Takeshi Kasai, regional director for WHO Western Pacific.

“This means that being vaccinated will stop you from getting very sick, but it may not prevent you from passing the virus onto others,” Kasai said.

“It is also the case that while these new vaccines are very promising, no vaccine is 100% effective,” he added.

Vaccinations should be paired with other measures in order to make progress in stopping the transmission of the virus.

For epidemiologist Brilliant, huge disparities in vaccine supply and rollout between countries have dealt the dream of herd immunity a fatal blow.

“Among humans, global herd immunity, once promoted as a singular solution, is unreachable,” said Brilliant.

“Most countries simply don’t have enough vaccines to go around, and even in the lucky few with an ample supply, too many people are refusing to get the shot,” the epidemiologist said.

“The world cannot wait for herd immunity to contain the pandemic,” he said. “For one thing, vaccination is proceeding too slowly. It is taking too long to produce and deliver sufficient supplies of vaccines and a sizable global anti-vaccine movement is dampening demand for them.”

“For another thing, there has been a constant flow of new variants of the virus, threatening the progress that has been made with vaccines and diagnostics,” he added.

According to infectious disease researcher Jeffrey Shaman, the virus would likely “stick around” if portions of the world’s population don’t get vaccinated — either through lack of supply or the people’s refusal to take a jab.

In the Philippines, the government is aiming to fully vaccinate 58 million to 70 million of the country’s population to reach herd immunity.

Vaccine czar Carlito Galvez said the country will reach its benchmark for herd immunity by November this year.

As of July 4, a total of 2,868,905 Filipinos have already received full doses of COVID vaccines. 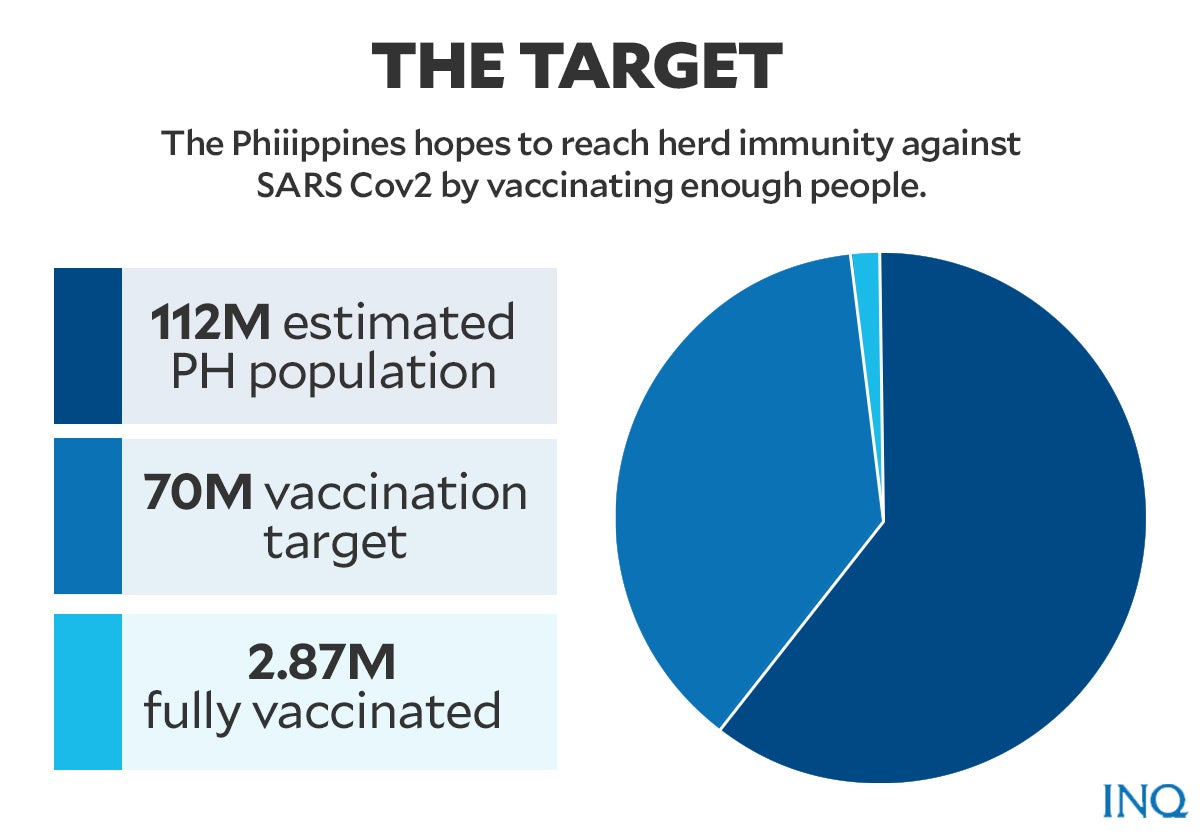 The Philippines has so far received over 17 million vaccine doses manufactured by Pfizer-BioNTech, Moderna, The Gamaleya National Center, Sinovac, and AstraZeneca.

If SARS Cov2 becomes endemic, the Philippines’ pandemic response was likely to continue but focusing on strategies on how people could live with the virus.

An example of this will be Singapore.

“The bad news is that COVID-19 may never go away. The good news is that it is possible to live normally with it in our midst,” said a report on The Straits Times quoting Singapore’s multi-agency task force on pandemic response.

“We can’t eradicate it, but we can turn the pandemic into something much less threatening, like influenza, hand, foot and mouth disease, or chickenpox, and get on with our lives,” the report quoted the Singaporean ministers as saying.

Like Singapore, the Philippines may also have to focus on vaccination and boost injection rates, testing and awareness about measures to slow down virus transmission, including strict prevention.

Brilliant and his colleagues, on the other hand, pointed to some areas in global pandemic response that need improvement and which the Philippines could also adopt.

Early and rapid detection of infections would be key to enhanced response, Brilliant said.

“With a viral epidemic, timing is nearly everything. The faster an outbreak is discovered, the better chance it can be stopped,” the Foreign Affairs article read.

“In the case of COVID-19, early and rapid detection would let decision-makers around the world know where to surge appropriate vaccines, what variants are circulating, and how to triage resources based on risk,” it added.

This included having improved viral-sequencing technologies, which might save time since countries with this type of technology will no longer have to send samples for genetic sequencing to First World countries.

“This is a matter not only of fairness but also of epidemiological necessity, since the closer to its origin a new epidemic can be detected, the faster the world can respond,” Brilliant and his colleagues explained.

The Philippines may also learn more from the strategies implemented by countries like Taiwan, Vietnam, and South Korea which countered the early COVID-19 outbreak by looking back at their experiences with an earlier, possibly precursor, virus—SARS or MERS.