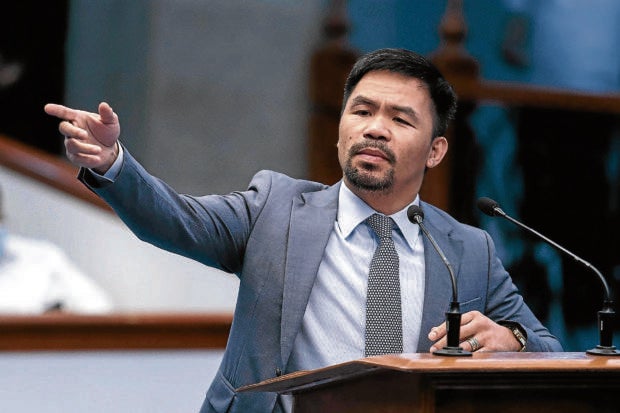 Pacquiao earlier said Starpay, which was tapped by the Department of Social Welfare and Development (DSWD), failed to distribute fully the aid under the Social Amelioration Program (SAP) . He said that P10.4 billion was  missing even, though it was noted that all of the payouts have been completed.

He said P50 billion of the P206 billion allocated for SAP was routed to Starpay, which Pacquiao tagged as a “lesser known” e-wallet service with a paid-up capital of only P62,000.

Starpay, in response, said more than five million beneficiaries had been given cash aid through its platform “in a very short period of time.”

It added that it has already liquidated the funds it received and refunded the amount for unserved beneficiaries to the DSWD, totaling to P8.239 billion.

Starpay said it began dealing with DSWD in June 2020, and was initially awarded coverage of about 1.6 million beneficiaries, but it went “above and beyond” the original allocation set by the DSWD and the Bangko Sentral ng Pilipinas (BSP).

“With our large partner network, we were able to expand and assist several million more beneficiaries to receive their much-needed amelioration. This was achieved because of our unique online and offline distribution model, where beneficiaries without smartphones were given reference numbers to claim their amelioration at their own time and convenience,” Starpay said in a statement.

It added that as a licensed electronic money issuer supervised by the BSP, it was required to have a capital of P100 million before getting a license, denying Pacquiao’s claim that its capital was only P62,000.

“Senator Manny Pacquiao’s statement during his press conference that our current capitalization is P62,000 is incorrect, while the correct and accurate figures are easily verifiable with the Securities and Exchange Commission,” Starpay said.

The DSWD earlier said it was willing to face any investigation on the disbursement of subsidies under the SAP.

Read Next
Death toll rises to 27 at Miami area condominium collapse
EDITORS' PICK
Acer starts the year off strong with the Aspire Vero National Geographic Edition
PH logs 37,070 more COVID-19 cases; over 33K others recover
The best of bayside and city living at SMDC’s Sail Residences
Comelec division junks petition to cancel Marcos COC for president
Marcos camp ‘extends hand of unity’ after COC cancellation bid is denied
Over 3 Million worth of prizes to be won at Smart Padala’s SENDali Manalo Promo!
MOST READ
NBI foils escape attempt of Kerwin Espinosa, two others
Comelec division junks petition to cancel Marcos COC for president
Francine Diaz’s manager denies actress is being courted by Seth Fedelin
‘Not my loss’: Did Kris Aquino just comment on her breakup with Mel Sarmiento?
Don't miss out on the latest news and information.