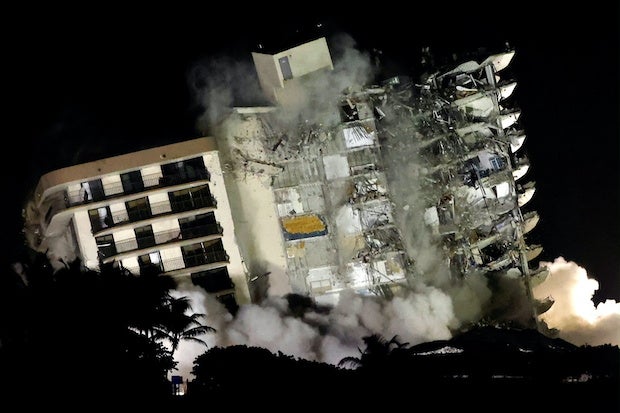 SURFSIDE, Florida — Three more bodies were found in the debris of a partially collapsed Miami-area condominium on Monday, bringing the total dead to 27, after the remaining parts of the complex were demolished overnight, according to media reports.

The bodies were found after suspended search-and-rescue efforts resumed following the managed demolition of the remaining part of Champlain Towers South complex in Surfside, where many remain missing, local media reported.

At about 10:30 p.m. local time on Sunday, explosives brought down the rest of the partially collapsed 12-story building in Surfside that initially crumbled on June 24.

Search-and-rescue efforts had been called off during the demolition. Those efforts will resume as soon as it is deemed safe, Cava told reporters earlier on Sunday.

As of Monday morning, Tropical Storm Elsa was nearing Cuba with sustained winds peaking near 60 mph (100 kph) and was set to churn across the country on its way to Florida. It was moving northwest at 14 mph (22 kph), said Cuba’s Meteorology Institute.

The storm was forecast to approach western Florida on Tuesday or Wednesday.

Ahead of the demolition, residents in nearby buildings were told they did not need to evacuate but were instructed to stay indoors and turn off air conditioning due to dust.

Investigators have not determined what caused the 40-year-old complex to collapse. A 2018 engineering report found structural deficiencies that are now the focus of inquiries that include a grand jury examination.

All residents of another building, Crestview Towers in North Miami Beach, were told on Friday to leave immediately after engineers found serious concrete and electrical problems, officials said.