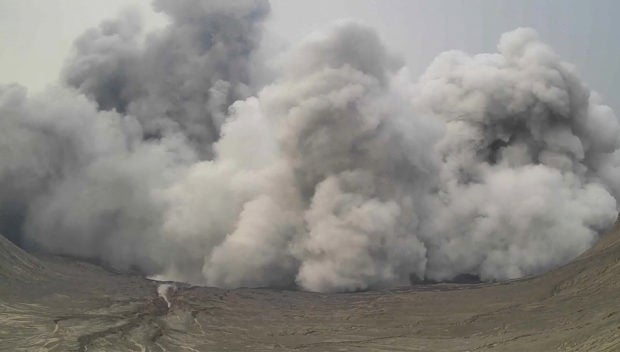 MANILA, Philippines — Taal Volcano showed no sign of calming down after it spewed volcanic plumes  around 2.5 kilometers high in the last 24-hours, the Philippine Institute of Volcanology and Seismology (Phivolcs) said Sunday.

In its latest advisory, Phivolcs added that the restive volcano’s  sulfur dioxide (SO2) emission averaged 14,699 tons on July 3, 2021.

“High levels of volcanic sulfur dioxide or SO2 gas emissions and steam-rich plumes that rose as much 2,500 meters high that drifted south-southwest were generated from the Taal Main Crater,” said Phivolcs.

Magmatic unrest or Alert Level 3 is still in effet, meaning magma extruding from the volcano’s main crater could trigger an “explosive eruption.”

The alert level was raised after Taal Volcano had a phreatomagmatic eruption Thursday afternoon.

Phivolcs reminded that the entire Taal Volcano Island is a permanent danger zone, and entry into the island as well as into the high-risk barangays of Agoncillo and Laurel must be prohibited due to the hazards of pyroclastic density currents and volcanic tsunami should strong eruptions occur.

“Phivolcs maintains its close monitoring of Taal Volcano and any new development will be communicated to all concerned stakeholders,” the agency added.