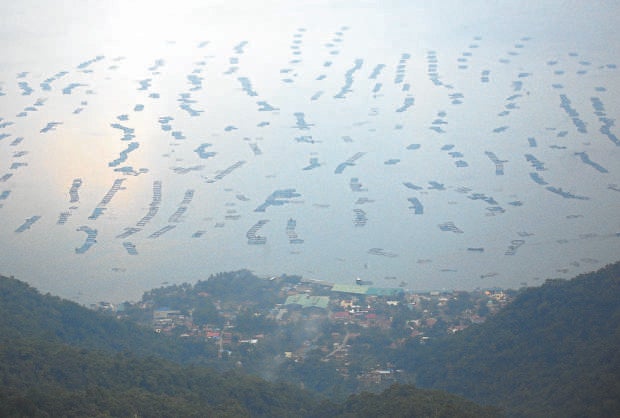 IN A VOG Taal Lake becomes a hazy memory of fish pens as sulfur dioxide emissions from Taal Volcano blanket the volcano island and the towns overlooking it. According to the Philippine Institute of Volcanology and Seismology (Phivolcs), the country’s second most active volcano spewed 14,326 tons of gas emissions on Monday, forcing residents of Talisay town in Batangas to stay indoors. —LYNRILLON

MANILA, Philippines — Taal Volcano’s emission of “dark phreatomagmatic plume” on Thursday may cause ashfall but only over areas closest to it and not expected to reach as far as Metro Manila.

The Philippine Institute of Volcanology and Seismology (Phivolcs) said that in the event ashfall ensue, it would only be on towns southwest of the restive volcano such as areas near the Balayan Bay like San Luis, Taal, Agoncillo, Lemery, and Calaca.

Earlier Thursday, Taal Volcano belched a kilometer-high dark phreatomagmatic plume leading people to fear that scenarios of its January 2020 explosion would happen all over again. More than a year ago, Taal erupted and caused ashfall that affected areas as far as Metro Manila as well as towns in Central Luzon.

But Solidum still noted it is important to wear masks to protect people from inhaling volcanic dust if in case ashfall incidents occur. He, however, also reminded the public not to rush in buying N95 masks as these should be left for people in areas that may be affected by ashfall.

Solidum then said they have no estimates yet on the amount of ash spewed by Taal on Thursday because the eruption happened quickly and lasted for just five minutes. He also noted the ash was contained in a small area.

He further clarified that volcanic smog or vog — fog with the sulfur dioxide released by Taal — may only be seen in areas near the volcano and not as far as Metro Manila.

A Phivolcs bulletin released earlier Thursday explained that Alert Level 3 was raised over Taal because of the occurrence of magmatic intrusion at the main crater, which can possibly lead to more eruptions.

Phivolcs has advised the evacuation of residents from high-risk barangays of Agoncillo and Laurel in Batangas.