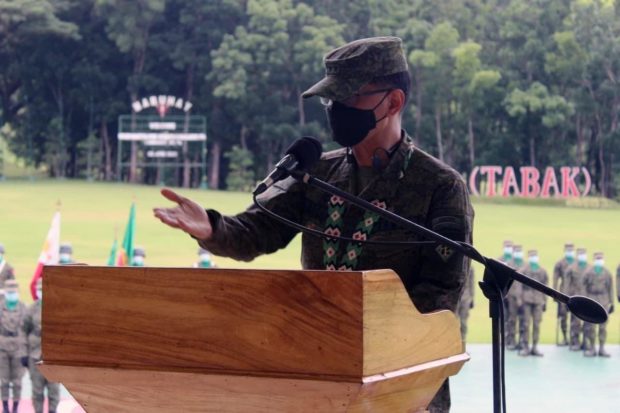 In calling for the recall of Bacarro’s appointment, Rodriguez cited the death by hazing of Philippine Military Academy (PMA) cadet Darwin Dormitorio back in 2019.

Bacarro is set to replace Lieutenant General Antonio Parlade who will retire on July 26.

“Mr. Bacarro is one of those responsible for the death by hazing of PMA cadet Darwin Dormitorio on Sept. 18, 2019,” Rodriguez said in a statement.

“Darwin was a constituent of mine in Cagayan de Oro,” Rodriguez said,” the lawmaker added.

Bacarro received the Medal of Valor—the highest military award given to soldiers—following an encounter with communist rebels in Isabela in 1991. He is currently the commander of the Army’s 2nd Infantry Division.

Bacarro, however, had his own share of controversy in his career, particularly the death of Dormitorio. At that time, Bacarro was the commander of cadets of the PMA. He eventually resigned from the post.

The Baguio City Prosecutor’s Office later dismissed complaints against him over the Dormitorio incident.

Rodriguez, however, said he and Dormitorio’s family could not understand why Bacarro had been promoted despite the PMA controversy.

“These developments are a grave injustice to my late constituent, his family and the people of Cagayan de Oro City,” Rodriguez said Thursday.

Back in June last year, Rodriguez also urged the Department of Justice (DOJ) to review the decision of the Baguio City Prosecutors’ Office.