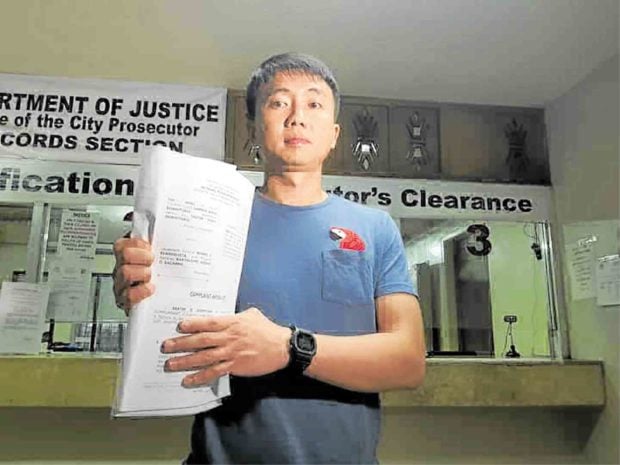 QUEST FOR JUSTICE Dexter Dormitorio continues to seek justice for his brother, Darwin, who died in September after undergoing hazing at the Philippine Military Academy. VALERIE DAMIAN

BAGUIO CITY, Benguet, Philippines — Two resigned officials of the Philippine Military Academy (PMA) were included in a new complaint filed on Monday by the Baguio police and the family of Cadet Fourth Class Darwin Dormitorio, who died from internal injuries attributed to beatings that occurred as far back as August.

Lt. Gen. Ronnie Evangelista, who gave up his post as PMA superintendent after taking command responsibility for Dormitorio’s death on Sept. 18, was charged with dereliction of duty, along with Brig. Gen. Bartolome Bacarro, the former commandant of cadets.

They joined two tactical officers and three doctors who were charged with dereliction of duty in a complaint filed on Oct. 8.

The seven senior cadets were earlier charged with hazing, murder and torture of Dormitorio, a member of PMA Class of 2023.

In their counteraffidavits, however, the tactical officers claimed that Evangelista and Bacarro were informed about the hazing before Dormitorio died.

“Many weeks elapsed but there were no concrete actions on their part to stop the acts of violence committed against Cadet Dormitorio,” Bonifacio said, citing the affidavits.

The Baguio City police and the National Bureau of Investigation also reached the same conclusions.

The plebe had complained of abdominal pain on the eve of his death, but he was discharged and allowed to return to his barracks after he was given medicines for urinary tract infection.

The Dormitorio family said it would ask the Professional Regulation Commission (PRC) in Manila to probe the doctors and to revoke their licenses for negligence.

In her counteraffidavit, Apostol said the hospital had informed Bacarro about Dormitorio’s condition. She said the doctors decided to release Dormitorio “after his condition improved.”

The Baguio prosecutor’s office is reviewing the charges and has received counteraffidavits from most of the respondents, except some of the cadets.

Dexter Dormitorio, brother of the slain cadet, urged families of other hazing victims in the academy to “step forward and complain.”

He said most of the maltreatment cases recorded in September were still being investigated by the academy. Last month, two videos showing cadets being punched and kicked surfaced online. PMA has detained the suspects.