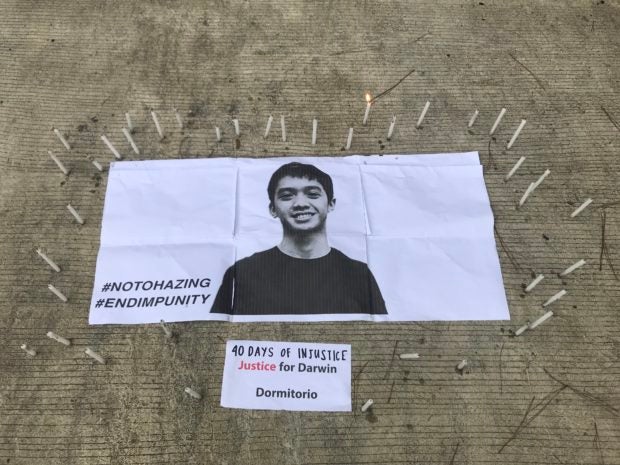 MANILA, Philippines — The family of Cadet 4th Class Darwin Dormitorio is “dissatisfied” with the decision of the Baguio City Prosecutor’s Office not to pursue criminal charges against other personalities tagged in the hazing death of the Philippine Military Academy freshman.

In a statement Thursday, Darwin’s brother Dexter lamented the resolution, given the “overwhelming evidence” against all respondents tagged in the hazing that led to Dormitorio’s demise on September 18 last year.

“I would just like to reiterate that our enemy is hazing and not the institution. However, our family is dissatisfied with the resolution because the Anti-Hazing Law of 2018 was only selectively and partially applied despite overwhelming evidence supporting our cause against all respondents,” he said.

“We only yearn for fair justice but at this juncture, we feel like we are already being deprived of it,” said Dexter, adding that their family is still reviewing the resolution and will consider all possible legal options.

Nevertheless, he said their family is “relieved” that a resolution was finally issued nine months after the death of his brother.

“We are grateful that the prosecutors concurred with our position regarding the Anti-Hazing Law being applicable in PMA,” said Dexter.

In a 66-page resolution dated June 5, the panel of prosecutors recommended that Cadets 3rd Class Shalimar Imperial and Felix Lumbag Jr. be charged for murder and for violating Section 14 (a) of the Anti-Hazing Law.

However, the panel ruled that the other five PMA cadets who allegedly participated in the maltreatment under a disavowed tradition called “katay,” or punishment for small infractions, committed offenses that were not part of the main complaints.

The prosecutors likewise dismissed the complaints against former PMA Superintendent Lt. Gen. Ronnie Evangelista and former Commandant of Cadets Brig. Gen. Bartolome Vicente Bacarro, who both resigned from their posts following the death of Dormitorio.

Initial investigation showed that Dormitorio, a son of a retired Army colonel, suffered at least eight incidents of maltreatment allegedly by his upperclassmen – a series of terrifying instances that police described as “hell” for the young cadet. Dormitorio was also hospitalized four times prior to his death on September 18, 2019, police noted.