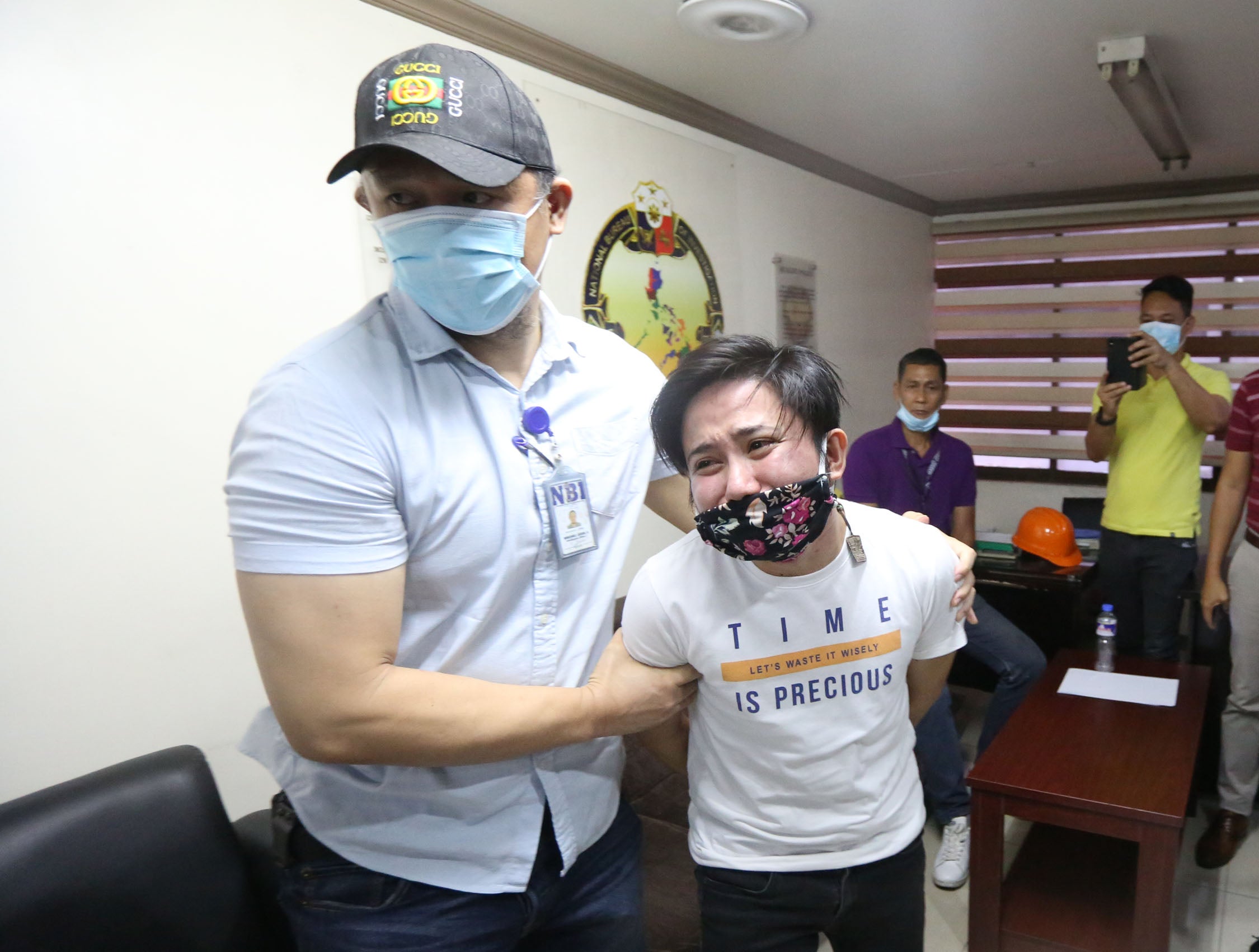 TEARS OF CONTRITION Ronnel Mas, a 25-year-old public school teacher from Masinloc, Zambales, breaks into tears when arrested by agents of the National Bureau of Investigation on Tuesday over a Twitter post offering P50 million to anyone who could kill President Duterte. Mas later apologized to the President, saying he just wanted his social media post to be noticed. —FILE PHOTO/MARIANNE BERMUDEZ

MANILA, Philippines—For the third time, the inciting to sedition case filed by the National Bureau of Investigation (NBI) against public school teacher Ronnel Mas for posting on Twitter an offer of a P50 million reward to anyone who could kill President Rodrigo Duterte was turned down.

On May 5, 2020, a Twitter post from a certain @RonPrince stated, “I will give 50 million reward kung sino makakapatay kay (to anyone who would kill) Duterte #NoToABSCBNShutDown.”

Mas was arrested six days later by the NBI stating he was the owner of the @RonPrince Twitter account.

An information was filed against him for sedition. However, the Olongapo City RTC Branch 72 Judge Richard Paradeza quashed the Information (charge sheet) against Mas saying he was illegally arrested. His subsequent confession to the media that he is the owner of the said Twitter account did not cure the invalidity of his apprehension.

The court said the NBI should have observed the rules and respect the constitutional rights of the person suspected of posting the bounty offer.

Mas was arrested without a warrant using as a basis a sole witness identifying him as the owner of the @RonPrince Twitter account.

The NBI again filed a case against Mas which was dismissed in February this year. The Olongapo City Prosecutors Office dismissed the case for lack of probable cause.

The prosecutors’ office also said the NBI failed to record Mas’supposed confession to the media.

The NBI sought a reconsideration of the February 2021 resolution of the Olongapo Prosecutor. It also turned over as new evidence 2 compact discs showing the confession of Mas and an affidavit of a certain Ronald Allan Sison as the one who interviewed Mas during his extrajudicial confession.

But in a resolution dated June 22, Assistant City Prosecutor and Acting Zambales Provincial Prosecutor Leonardo Santos said he could not entertain the new evidence submitted by the NBI because the video remains unauthenticated.

The resolution also pointed out that the NBI tried to undermine the Office of the Prosecutor by stating that its duty “is merely inquisitorial, based on opinion and grounded only on a ‘well-founded’ belief.”

“This Office is tasked with a crucial duty to determine whether or not there is probable cause, which may or may not deprive the respondent of his constitutional right to liberty,” read the resolution.

Besides, what the NBI did in submitting new evidence in its motion for reconsideration “is not proper,” according to the resolution.

Quoting a Supreme Court ruling, the resolution stated that “the very purpose of a motion for reconsideration is to give the prosecutor a chance to correct any errors that he or she may have committed to issuing the resolution ordering the filing of an Information in court. Reception of new evidence is not within the office of a motion for reconsideration.”

The prosecutor, however, made clear that the case was being dismissed not because that a crime has not been committed but rather “the insufficiency of evidence to prove that indeed the respondent is the perpetrator of the crime, that he owns the Twitter account and that he is the one who posted it.”

“It is undeniable that there is a Twitter remark as established by the screenshots attached to the complaint, subject to its evidentiary value during the trial. However, needless to emphasize is the imputation of the act on the respondent must be duly supported by evidence…It goes without saying that since the identity of the person who has twitted the seditious remarks has not been duly established, hence, it follows that there is doubt as to the administrative liability of the respondent. It is not only axiomatic but logical that the same must necessarily fail,” he added.

The prosecutor said the NBI can still re-file the case.

“Indeed, such seditious remarks must not go unpunished. The NBI must be commended in its efforts to contribute [to] the peace and stability of our country, However, the rules on evidence in establishing probable cause must be upheld. As explained above, the complainant is not without recourse, as it can simply re-file this case with sufficient documents and evidence to establish probable cause,” read the resolution.

“I hope they accept defeat and they should already stop harassing teacher Ronnel. The officers concerned should be reminded that President Duterte’s term is about to end, but their administrative and criminal liabilities for their illegal actions remain,’” De Leon said.

Instead of re-filing the case, he said it would be better for the NBI to allow Mas to live a peaceful life.

“I urge them to observe the rule of law and to move on. They should allow a simple person like teacher Ronnel to continue living his life in peace,’ he added.