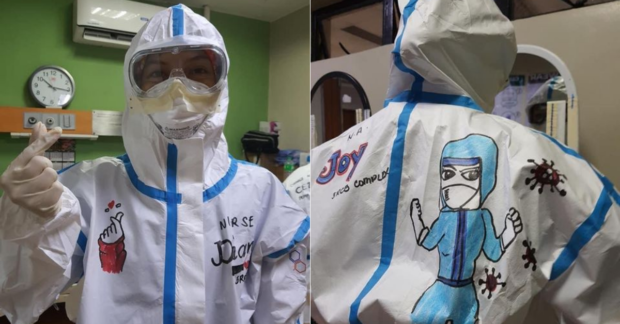 These artworks made by one of the staff nurses bring joy not only to Philippine General Hospital’s pediatric patients but also to adults. Photo courtesy: Sheena Grace Diamante

MANILA, Philippines — The P9 billion fund for the new tranche of special risk allowance for health workers at the frontlines against COVID-19 has been released to regional offices of the Department of Health (DOH), Health Undersecretary Maria Rosario Vergeire said Tuesday.

Vergeire said the DOH released the funds on the same day that the Department of Budget and Management (DBM) issued the Special Allotment Release Order (SARO) for the same amount last week.

(On that same day, the money provided to us by the DBM was distributed to regional offices and hospitals immediately.)

(So the healthcare workers will now be able to receive their benefits with this money so that the funds will not expire.)

The DBM earlier said the allotment released to the DOH will cover the period of December 20, 2020 to June 30 this year as mandated under Administrative Order No. 42 issued by President Rodrigo Duterte earlier this month.

The President issued Administrative Order No. 36 last year, which covered the special risk allowances for September 15 to December 19, 2020.

According to DBM, qualified public and private health workers can expect the payment of the special risk allowance not later than June 30 for the AO No. 42.

The two departments issued on June 16 Joint Circular No. 1-2021, which states that the allowance will be available to “public and private health workers who directly cater to or [are] in contact with COVID-19 patients.”

Meanwhile, Vergeire said the DOH is still coordinating with the DBM regarding the monetization of health workers’ allowances for transportation, food and accommodation.

Vergeire earlier said the budget was returned to the DOH in December last year since the allowances are not being used by hospitals due to certain rules on procurement and fund utilization.

The DOH later repurposed these funds. Vergeire, however, said the money was still used for healthcare workers who got sick or died.

She assured that the DOH is doing its best to provide the benefits due to medical frontliners.

(The DOH wants to inform our healthcare workers that we are doing our best to provide the accorded benefits for you.)