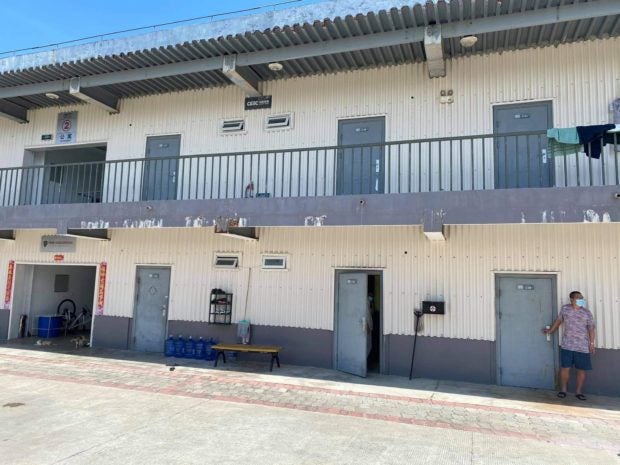 ISOLATED Eighteen Chinese nationals and a Filipino working at Palm Concepcion Power Corp. plant are isolated at its dormitory complex in Concepcion, Iloilo, after they tested positive for COVID-19. —PHOTO COURTESY OF MAYOR RAUL BANIAS

ILOILO CITY—The plant site of a 135-megawatt coal-fired power plant in a town in Iloilo has been locked down after 19 workers, 18 of them Chinese nationals, tested positive for the coronavirus disease.

The compound of Palm Concepcion Power Corp. (PCPC) in Concepcion town, around 98.4 kilometers from Iloilo City, would be closed from June 25 to July 8, according to a company statement.

“… Despite the plant lockdown and work-from-home arrangement for the other employees, operation of the power plant, manned by personnel who have already been tested and with negative results, will still continue and services to its customers shall remain unhampered,” according to the statement released on June 26.

All personnel essential for the continued operation of the plant underwent COVID-19 swab test and would not be allowed to go out of the plant’s control room and would be provided with food and other needs, it said.

A worker exhibited flu-like symptoms on June 23, prompting testing with the positive result released on June 24.PCPC said the Chinese nationals are personnel of its operation and maintenance contractor.

Concepcion Mayor Raul Banias, in a text message, said the 18 Chinese nationals and a Filipino working at the plant were mostly asymptomatic, with a few showing mild symptoms.

He said all the infected workers had been isolated at the plant’s dormitory that was converted into a temporary isolation facility.

He said they decided to isolate the workers at the plant due to language barrier and special food requirements of the Chinese nationals.

Medical personnel of PCPC and the municipal government are monitoring those under isolation, he added.