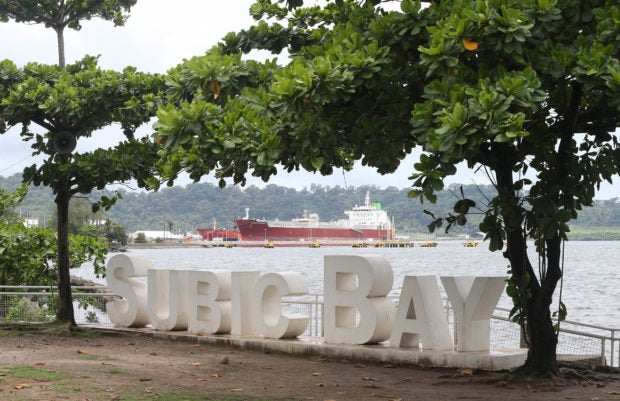 ECONOMICS AND ENVIRONMENT Subic Bay Freeport is set to benefit from a China-funded railway project linking it to Clark Freeport but about 42 hectares of mangrove forest will be affected if it is implemented under the present construction proposal. —NIÑO JESUS ORBETA

CLARK FREEPORT—About 42 hectares of mangrove forest within the watershed reserve of Subic Bay Freeport is at risk and may have to make way for the Subic-Clark Railway Project unless the Chinese company handling the construction alters its proposed track alignment, according to documents from the Bases Conversion and Development Authority (BCDA) obtained by the Inquirer.

Threatened by the project are the 30-ha Binictican-Malawaan patch and the 12-ha Boton site of the freeport’s 62-ha mangroves, which are protected by Proclamation No. 926 issued in 1992 by the late President Corazon Aquino.

The threat to the Subic mangroves has alarmed Save Subic Bay Mangroves Coalition (SVMC), which is now asking the government to construct the project away from the mangroves, which was discussed in a June 17 meeting between SVMC representatives and BCDA officials led by Timothy John Batan, undersecretary for railways of the Department of Transportation (DOTr).

“We are not antiprogress. What we are asking [the] proponents is to change the project’s alignment away from mangroves, forests, water sources and population. The [affected] 42-has is part of the last remaining mangrove stand in Subic Bay and to put a railway through there does not make any sense,” said Jen Velarmino-van der Heijde, SBMC spokesperson, on Sunday.

Mangroves are “important” to the freeport because the forest serves as a natural laboratory for research, sustains fishing by providing feeding, spawning and nursery grounds for marine life, and acts as a buffer between the land and sea, according a Subic Bay Metropolitan Authority (SMBA) ecology center document.

The Subic mangroves also serve as a wildlife refuge and feeding grounds for Philippine mallards or ducks, functions as recreational grounds for bird-watching and the observation of other wildlife, and are sites for ecotourism activities, the document showed.

The mangroves are sources of food, low-cost housing materials and potential retail products for the Aeta community.

The DOTr and the BCDA are behind the 71-kilometer freight railway connecting the former Subic and Clark military bases that were leased to the United States until 1992.

The railway project, which was approved by the National Economic Development Authority in 2018, would need P50 billion, with 85 percent to be sourced from China’s official development assistance.

Based on the documents prepared by the BCDA, China Harbour Engineering Company has reported that the affected area, spanning 7.3 ha, is part of Phase 1 of the railway project, which is included in the “Build, Build, Build” initiative of the Duterte administration.

China Harbour proposed to build a Subic Logistics Terminal on that site, which is at a portion of Aeta ancestral domain. The tribal community supposedly consented to the project, according to documents the Inquirer obtained from sources.

The DOTr and the BCDA reportedly proposed that the displaced mangrove trees can be saved through earth-balling, which will be undertaken “in coordination with [the] SBMA ecology center to properly identify the best choice of area for replanting.”

Paquito Moreno, regional executive director of the Department of Environment and Natural Resources, has asked the BCDA to provide “exact coordinates of the area to be affected by the project” to determine what regulatory agency has jurisdiction over environmental permits, a copy of his June 16 letter to the BCDA showed.

The construction of new roads and bridges for another project at Subic freeport had previously affected 8,811 trees, prompting the SBMA ecology center to replant 26,000 propagules on a 1.33-ha property. INQ