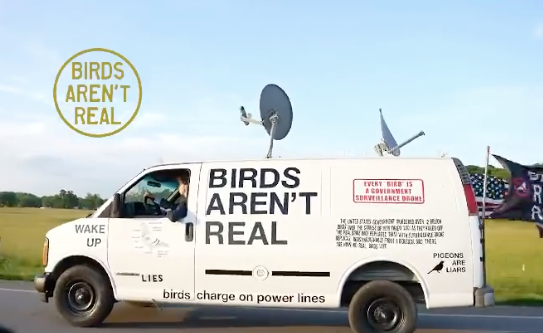 The “Birds Aren’t Real” movement in the United States has started conducting rallies across the country, making  Springfield, Missouri, its first stop.

A group gathered at Park Central Square in Downtown Springfield last Wednesday, June 23, as per Fox affiliate KTVI the next day.

The said movement claims that over 12 billion birds in the US have been killed by the government and replaced with drones used to spy on citizens.

Birds Aren’t Real was actually formed for satirical purposes, poking fun at other conspiracy theorists on the internet with wild claims, such as QAnon, according to the outlet.

Although Mcindoe claimed that he did not start the movement, he is reported to have first gone live with Birds Aren’t Real in January 2017 during a Memphis Women’s March.

According to the non-profit environmental organization National Audubon Society, Mcindoe is the creative mastermind behind the conspiracy, which he uses to earn money by selling Birds Aren’t Real-inspired goods. Ian Biong  /ra

Why anyone could potentially fall for a conspiracy theory