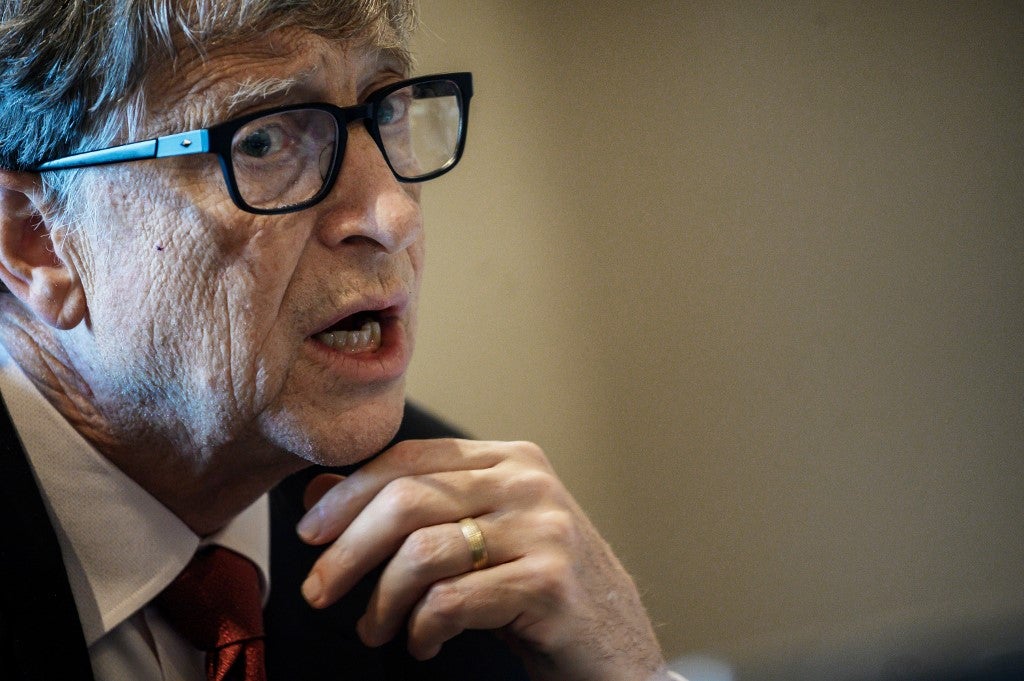 (FILES) In this file photo taken on October 9, 2019 US Microsoft founder, Co-Chairman of the Bill & Melinda Gates Foundation, Bill Gates, takes part in a conference call in Lyon, central eastern France, during the funding conference of Global Fund to Fight AIDS, Tuberculosis and Malaria. (Photo by JEFF PACHOUD / AFP)

Billionaire philanthropist Bill Gates on Thursday pushed back against some of the conspiracy theories spreading online accusing him of creating the coronavirus outbreak.

“It’s a bad combination of pandemic and social media and people looking for a very simple explanation,” the Microsoft founder said during a CNN Town Hall interview.

Doctored photos and fabricated news articles crafted by conspiracy theorists — shared thousands of times on social media platforms and messaging apps, in various languages — targeting Gates have gained traction online since the start of the pandemic.

A video accusing Gates of wanting “to eliminate 15 percent of the population” through vaccination and electronic microchips has racked up millions of views on YouTube.

“Our foundation has given more money to buy vaccines to save lives than any group,” Gates said, referring to his eponymous foundation.

He has pledged $250 million in efforts to fight the pandemic, and his foundation has spent billions of dollars improving health care in developing countries over the past 20 years.

“So you just turn that around. You say, ok, we’re making money and we’re trying to kill people with vaccines or by inventing something,” Gates continued.

“And at least it’s true, we’re associated with vaccines, but you actually have sort of flipped the connection,” he said, adding he hopes the conspiracies don’t generate “vaccine hesitancy.”

Since the start of the crisis, AFP Fact Check has debunked dozens of anti-Gates rumors circulating on platforms like Facebook, WhatsApp and Instagram in languages including English, French, Spanish, Polish and Czech.

A number of accusations, including posts claiming that the FBI arrested Gates for biological terrorism or that he supports a Western plot to poison Africans, share a common thread.

They accuse the tycoon of exploiting the crisis, whether it is to “control people” or make money from selling vaccines.

“I’m a big believer in getting the truth out,” Gates told CNN.

It is not the first time Gates has found himself targeted by conspiracy theorists. When Zika virus broke out in 2015 in Brazil, he was one of several powerful Western figures blamed for the disease.

Other rumors claim he is secretly a lizard, an old favorite among online trolls.