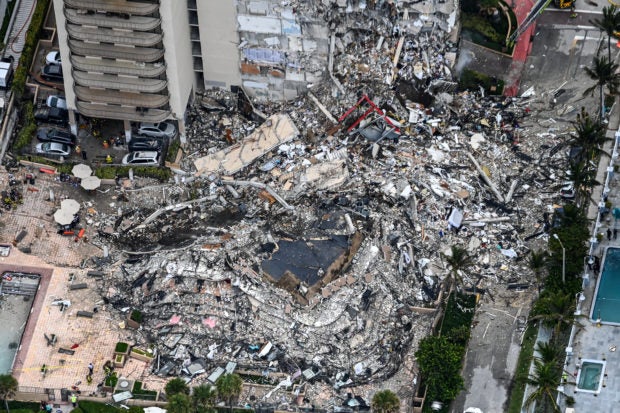 This aerial view shows search-and-rescue personnel working on site after the partial collapse of the Champlain Towers South in Surfside, north of Miami Beach, on June 24, 2021. Image: AFP/Chandan Khanna

A man walking his dog last Thursday midnight, June 24, was able to save a young boy who was trapped under the rubble of the collapsed condominium in Florida in the United States.

Nicholas Balboa was walking his dog when he felt a rumble, which he thought was a storm at first, as per NewsStation Now on the same day.

After feeling the rumble again around 30 seconds later, he noted that “it kind of clicked to me that something wasn’t quite right.”

Balboa then took the family pet home and rushed outside to get to the source of the rumble, along with other residents. They then arrived at the partially collapsed Champlain Towers South, according to the report.

“It was eerily quiet, like, almost something like out of a horror movie,” he was quoted as saying. “It was just silent, even with all of the emergency vehicles not too far away.”

Balboa shared that no emergency response teams were seen at the time he arrived and only saw other onlookers. He and another person then approached the scene to take a closer look at the rubble and heard a boy scream.

“I was able to spot his hand popping up through the rubble, and he was asking, ‘Can somebody see me?’” Balboa told the news outlet.

He then stayed with the boy, whom he said was panicking and who told him that his mother was also in the condo, but Balboa could not see or hear her.

Balboa recalled using his phone’s flashlight to get the police’s attention, which led to rescuers extracting the boy trapped under the collapsed building.

Around 159 people are still missing, while four have been confirmed dead as of this morning, June 26. The boy’s mother, Stacie Fang, was confirmed as among the casualties by her relatives, as per USA Today yesterday, June 25. Ian Biong /ra