MANILA, Philippines — The sights at Ateneo de Manila on Friday night were reminiscent of cabinet meetings during ex-president Benigno “Noynoy” Aquino’s administration — only that, the former chief executive was no longer there to preside over the meeting.

Aquino’s colleagues from the cabinet and his close allies gathered at the Church of Gesù inside his alma mater Ateneo de Manila University where his remains were up for public viewing, and recalled the days when the late leader was at the helm of the government. 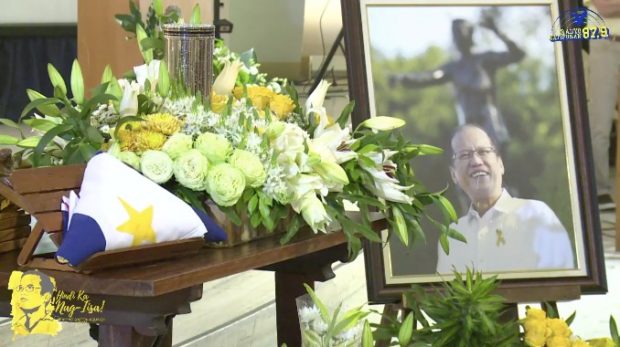 Ochoa was first to give a speech, in which he surmised what Aquino would have told them had there been a chance to say his last wishes or poke fun at the other former officials’ habits.

Former Education secretary Armin Luistro, in his speech, recalled his bewilderment when he, a La Sallian, was first asked to join the cabinet of an Atenean president.

Social Welfare secretary Dinky Soliman remembered the former president for being strict and his keen attention to detail.

Aquino died on Thursday morning, with his sisters announcing that it was due to renal disease secondary to diabetes. Aquino’s sister Pinky Aquino-Abellada read a statement on Thursday afternoon, confirming that the former president died peacefully in his sleep, before he was rushed to the Capitol Medical Center.

Earlier, the Aquino family announced that a funeral mass would be held at 10:00 a.m. at Church of Gesù also, which would immediately be followed by a procession towards the Manila Memorial Park in Sucat, Parañaque.