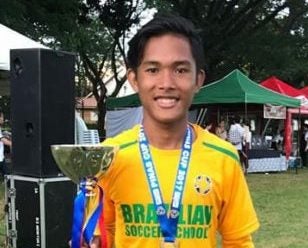 LEGAZPI CITY, Albay, Philippines — The Philippine National Police on Tuesday night announced the filing of double murder and frustrated murder charges against 24 suspected communist rebels for the deaths of university athlete Kieth Absalon and his cousin, Nolven, who died in a land mine blast in Masbate City on June 6.

In an interview over radio station dzRH on Tuesday, PNP Chief Guillermo Eleazar said the Masbate City police filed on Monday the complaint in the local prosecutor’s office naming 24 respondents, all of them suspected members of the New People’s Army (NPA).

One of them, Mariel Suson, was arrested on Tuesday through a warrant for a separate murder case issued by the Masbate City Regional Trial Court Branch 45.

Col. Juriz Cantoria, Masbate provincial police chief, said Suson, 22, a native of Cawayan town, did not resist arrest when served with a warrant issued by Judge Arnelo Mesa for her alleged involvement in the killing of Reinerio Villamor on April 22 in Masbate City.

Suson was among the nine suspected NPA rebels linked to the Villamor slay.

Lt. Col. Steve dela Rosa, Masbate City police chief, said when Suson was taken to the city police station for documentation and disposition, they learned that she was also included in the list of people believed to be responsible for the land mine blast in Barangay Anas that killed the Absalon cousins.

Dela Rosa said Suson’s name was included in the list of suspects that the Masbate police submitted to the city prosecutor’s office on Monday. He said they filed at least seven criminal complaints against the suspects.

“We have a strong case and gathered evidence against the suspects as we are hoping that these would be a basis for the court to issue a warrant of arrest against them,” he added.

According to police investigators, Suson is a daughter of Rogelio Suson, also known as Manong or Julio, the secretary of the NPA Larangan 2 of the Bicol Regional Party Committee.

Eleazar said: “The filing of the case took long because investigators at the Masbate City police needed to get statements and other pieces of evidence that would serve as basis for the complaint.”

The PNP chief noted that most of the respondents were locals and identified by witnesses.

The NPA operating in Bicol region had taken responsibility for the June 6 blast.

In an earlier statement, Raymundo Buenfuerza, spokesperson for the NPA’s Romulo Jallores Command operating in Bicol, said the detonation of a land mine was a mistake and sought forgiveness from the victims’ relatives and the public.

Vilma Absalon, Kieth’s mother, said she was not satisfied with Suson’s arrest.

“I am not happy that only one of them surfaced. They should all surrender and tell us the truth so we can stop grieving. We should know why they killed my son,” said Vilma, whose son was a varsity football player of Far Eastern University.